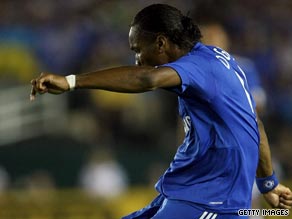 Drogba's goals have proved crucial to Chelsea in recent seasons.

The 31-year-old is tied contractually to Stamford Bridge until 2012 after extending his current deal, which had a year to run, by a further two years.

It completes a remarkable change of fortunes for the Ivory Coast international who looked set to leave Chelsea last season after being dropped by then manager Luiz Felipe Scolari.

But he returned to his best under interim boss Guus Hiddink and scored the equalizer in Chelsea's FA Cup final victory over Everton.

But new manager Carlo Ancelotti will be pleased to seal a deal with Drogba after failing to land Italy midfielder Andrea Pirlo from AC Milan, his top transfer target in close season.

"I have decided to extend my contract with Chelsea for two extra years and I am very happy and proud to continue to wear the blue of Chelsea until then," Drogba told Chelsea's official club Web site..

"I love the club, I feel good here and I want to continue to win titles with them.

"I stay because I am ambitious to pick up lots more trophies, regain the Premier League title, win cups. It is for this that I have extended my time at Chelsea.

"But my number one objective is to win the Champions League. I am convinced that this year we can go to the end and finally lift this trophy."

Ancelotti signaled last week that he wanted Drogba to sign a new deal and has also persuaded Florent Malouda and Jon Obi Mikel to put pen to paper on extended contracts since taking over.

In other English Premier League news, Darren Bent has finally completed his protracted $16.5 million transfer from Tottenham to Sunderland.

The England international completed a medical and agreed terms with the Wearsiders on Wednesday.