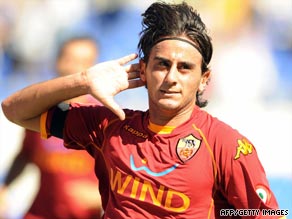 Italian midfielder Alberto Aquilani has completed his move to Liverpool as a replacement for Xabi Alonso.

Liverpool had a bid of around $29 million for Aquilani accepted by Serie A side Roma on Wednesday before the player headed to Merseyside for a medical and contract talks.

The 25-year-old is expected to be at Anfield on Saturday to witness his new team-mates take on Atletico Madrid in the club's final pre-season friendly before next weekend's Premier League kick-off. Latest transfer rumors and gossip

Aquilani's arrival alleviates fears over the ankle injury that needed surgery this summer and restricted his appearances for Roma last season.

But considering he has only just returned to training, it seems unlikely he will be fit to face Tottenham next Sunday in the opening match at White Hart Lane.

Meanwhile, in other transfer news, English Premier League side Aston Villa have signed defender Habib Beye from relegated Newcastle on a three-year contract.

Beye told the club's official Web site: "I think Villa are a great club. I was really happy when my agent told me Villa were interested.

"It's going to be great working for Martin O'Neill. It was important for me to stay in the Premier League and I am really happy I could do that with Villa, " Beye added.