(CNN) -- New signing Samuel Eto'o scored but Serie A champions Inter Milan were beaten 2-1 by Lazio in the Italian Super Cup which was staged in the Bird's Nest in Beijing on Saturday night. 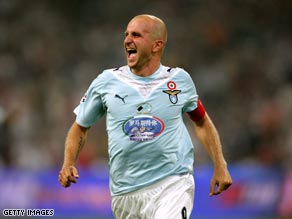 Rocchi celebrates his superb second goal for Lazio in the Bird's Nest.

The continued experiment of staging the curtain raiser to the Italian season overseas again proved a success with a near-capacity crowd in the Olympic stadium seeing an action-packed encounter.

Rocchi quickly grabbed a second as he superbly chipped keeper Cesar to make it 2-0.

Mourinhoi made a series of substitutions and it worked to good effect as Eto'o, Barcelona's top scorer last season, smashed the ball high into the net in the 75th minute.

Substitute Diego Milito had the ball in the net soon afterwards, but the equalizer was ruled out for offside, while Eto'o went close with a free kick near the final whistle.

Mourinho took defeat in his strike and claimed his side were the better team.

"Lazio have the joy of victory, we have the calmness of having a team and a future," he told the Press Association.

"I am very happy with my players' performance, with this new style that is being born, but obviously I can't be happy with the result, above all because as everyone saw it could have finished in a different way, such as 3-1 to us.

"Before they took the lead we had 12, 14 chances. They spent the time in defense and had a lot of luck, then they played in the final few minutes."

The Super Cup was the first major event to be held in the iconic stadium since the Bejing Olympics, the match taking place a year to the day the opening ceremony took place in 2008.

It was the third time in the Super Cup's 22-year history that the match was held outside of Italy.