LONDON, England (CNN) -- With the shock death of Daniel Jarque - the 26 year-old Espanyol captain who suffered a cardiac arrest after training on Saturday - fans were left wondering how a man in such peak condition could endure a fate typically associated with the ageing and obese. 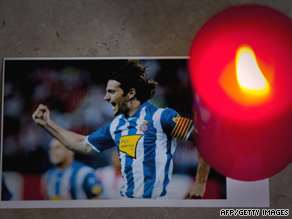 A picture of Espanyol's skipper Daniel Jarque is seen under a candle during a tribute ceremony.

There was also the shocking death of midfielder Marc-Vivien Foe, who had a cardiac arrest on live television while playing for Cameroon.

In Scotland, Motherwell fans still mourn the passing of club captain Phil O'Donnell who died on his way to hospital after suffering a seizure in a game against Dundee United in 2007.

These footballers all suffered from Sudden Death Syndrome (SDS) -- an umbrella term for a range of heart conditions that cause cardiac arrest in young people.

SDS conditions are much more fatal when combined with strenuous physical exercise; they are most often hereditary and, as Dr. Sanjay Sharma from the European Society of Sports Cardiology (ESSC) explains: "Only 20 percent of cases exhibit symptoms, for the other 80 percent the first symptom is death."

Andy Scott, a former striker for English sides Sheffield United and Leyton Orient, is one of the few professional footballers to detect an SDS condition before it killed him.

He suffers from hypertrophic cardiomyopathy - a disease that causes the heart muscle to expand significantly and is one of the most common causes of fatalities among young sporting professionals.

Scott, now a successful manager, was 32 when he experienced extreme tiredness and breathing difficulties during a league game for the Leyton Orient.

"I could barely feel my legs, but I just about managed to muddle through the first half. After the game I went to see the cardiologist and a few minutes later I was told that my playing career was over."

For the few that do experience symptoms (chest pains, breathing difficulties and dizziness being the most common) there are still barriers to detection.

Alison Cox, chief executive of the British charity Cardiac Risk in the Young (CRY), is concerned that athletes face a particular problem: "The fact that they are young and fit, don't do drugs and look fabulous means that any reported symptoms are often overlooked by doctors," she told CNN.

She added: "In many other cases young people just think 'that'll go away' and forget about it."

It is possible to screen for SDS, but the procedure (though simple to administer) requires an expert cardiologist to determine the result. According to Dr. Sharma, the lack of available expertise in Europe helps to explain why some governments are reluctant to make screening compulsory for all professional sportsmen.

At present the governing body of European football, UEFA, strongly recommend screening, but it is up to individual nations to decide if the procedure is mandatory.

In Italy, for instance, all players have to provide a certificate of health that includes tests for SDS. Spanish fans must now be questioning why the same rules do not apply in their country.

However, a player who suffers from SDS is uninsurable and this is why, despite flexible regulations, most top flight teams now insist on screenings before signing a new contract, Dr. Sharma told CNN.

Also, since 1994 when 16-year-old Everton prodigy John Marshall died from a heart attack, screenings have been compulsory for English players on youth training schemes.

Ultimately, Dr. Sharma says that SDS is very treatable, requiring only small changes to lifestyle such as avoiding over exertion and stress to significantly reduce the likelihood of fatality.

However, until the profile of the condition is raised, those affected could be playing unaware of the terrible risk they face.