LONDON, England (CNN) -- After an off-season of big-money transfers and endless speculation in Spain the focus finally turns to matters on the pitch. The first round of La Liga fixtures kick off this weekend and Fanzone details what to expect from the new campaign: 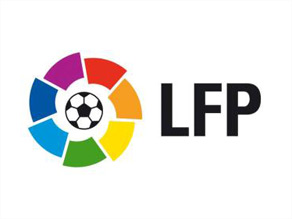 So what's new?
No sooner had Barcelona wrapped up an historic treble than all of the focus shifted to rivals Real Madrid following the much-vaunted return of Florentino Perez as the club's president.

The start of Perez's latest spell at the Santiago Bernabeu has seen a revival of the 'Galacticos' policy of the early 2000s as the club cherry-picked star players from around Europe in a bid to recapture former glories.

Los Merengues smashed the world transfer record twice in a week as winger Cristiano Ronaldo arrived from Manchester United for $130 million hot on the heels of the signing of Brazilian playmaker Kaka from AC Milan for $92m.

Who do you think will win La Liga? Sound Off below.

Barcelona clinched the signing of Zlatan Ibrahimovic from Inter Milan with Samuel Eto'o moving in the opposite direction while Inter's attacking full-back Maxwell also arrived at the Nou Camp.

Real's frenzied activity in the transfer market has somewhat overshadowed the appointment of former Villarreal coach Manuel Pellegrini in place of interim boss Juande Ramos while Ernesto Valverde takes over from the Chilean at El Madrigal.

Other managerial changes see Jose Angel Ziganda take charge of Xerez in their debut season in La Liga while Juan Ramon Lopez Muniz has left Racing Santander for Malaga with Juan Carlos Mandia the new man in the hot seat at El Sardinero.

Elsewhere, the start of Espanyol's first season at their new Cornella-El Prat stadium has been overshadowed by the shock death of 26-year-old captain Daniel Jarque who suffered a heart attack after training during preseason. 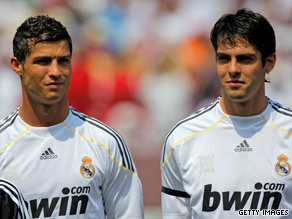 Key players:
It is hard to look beyond the potent attacking threat of Ronaldo, Kaka and Benzema who are all set to make their La Liga debuts for Real Madrid.

But it could well be that Alonso's decision to return to Spain which will prove the most decisive, especially if the midfielder can replicate the kind of form he showed in his final season at Liverpool.

Ibrahimovic's move to Barcelona raised a few eyebrows and how Pep Guardiola manages to fuse the enigmatic Sweden international with the talents of Lionel Messi, Thierry Henry et al will be crucial to whether they can match the success of last season.

Diego Forlan found the net 32 times to secure the Pichichi award for the most goals in La Liga and his partnership with fellow striker Sergio Aguero will provide the backbone of their hopes of improving on last season's fourth place. 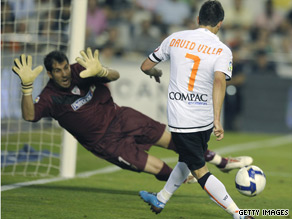 Despite intense speculation Valencia have kept hold of David Villa for their final season at the Mestalla.

Key clubs:
Real Madrid have spent big to try and close the gap between themselves and defending champions Barcelona and a lot will depend on whether they can turn their potential into effective team performances.

The task facing Pelligrini will be how to accommodate all of the players in his talent-laden squad, while Guardiola's problem will be how he emulates a superb first season in charge of the Blaugrana.

Despite their financial woes Valencia have managed to keep hold of prize assets David Villa and David Silva.

It also promises to be a fascinating season at Villarreal as they look to life under new coach Valverde following five seasons under Pellegrini. 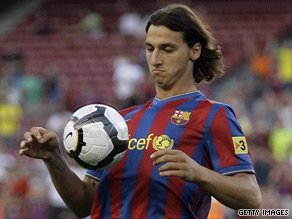 Expert view:
CNN's Pedro Pinto - "So Real Madrid have splashed the cash, but will the massive $365 million investment translate into success on the field? That is the question football fans are asking themselves leading up to the start of the season.

"There is enough talent in Real's squad for the team to aspire to greatness. On paper, they have all the necessary elements to succeed and perhaps emulate Barcelona and their historic treble-winning season. However we all know that football is not played on paper and I personally believe Los Merengues have no chance of achieving that.

"Rome was not built in one day and neither will a treble-winning team. Ronaldo and Kaka will be fantastic this season, I have no doubt of that, while Benzema and Alonso have made the side stronger, but Real can only aspire to win one trophy this season.

"I think the new coach Pellegrini will struggle to find the right balance in the team and therefore the league title will probably escape them.

"As far as the Champions League is concerned, though, I would definitely rank Real in the top three sides to lift the trophy. The final will be played at the Santiago Bernabeu and everyone at the club would love to end a European drought which started back in 2002 on home turf.

"Despite all their success last season, defending Spanish and European champions Barcelona shook up their squad in the summer. Eto'o, scorer of 38 goals in all competitions last season, left for Inter Milan. In exchange for the Cameroon striker, manager Guardiola got Ibrahimovic.

"The Sweden international's goalscoring record is inferior to Eto'o but he does add a different dimension. For the first time in a long time Barca will have a tall striker who can make an impact in the air, as well as create his own chances in the area and bring others into play.

"It was a good move for the Catalans when you consider that Eto'o hardly endeared himself to the team's dressing room. He was a winner, but he was also a whiner.

"There is no question the title will be decided between Real and Barcelona, with my vote going to the defending champions, but we should watch out for Atletico Madrid.

"As far as I am concerned, this is one of the most exciting teams in European football and last season they won five of their last six games.

"With Aguero leading the way, anything is possible and I believe this is will be a big year for 'El Kun' who should edge out Messi as the one to watch. From what I have seen in preseason, he is going to set the league on fire! Shame their defense is a bit shaky, although they signed Spain international Juanito from Betis.

"Overall I expect Barcelona to take the title -- the backbone of the team remains intact and the chemistry in the team is fantastic. They will have to dig deep to beat Real Madrid, but my hunch is that they will be able to do it. At the wrong end of La Liga, Getafe, Xerez and Tenerife will all do well to avoid the drop."