(CNN) -- Spanish international striker Fernando Torres has signed a new contract with Liverpool that commits him to the English Premier League club until at least 2013 -- and includes an option for him to stay for a further year. 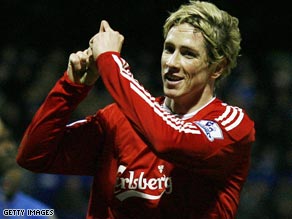 Striker Torres has pledged his future to Liverpool for the next four years.

Torres agreed terms on the deal in May and has now completed the formalities of signing the contract, Liverpool confirmed in a statement on their official Web site.

The 25-year-old is expected to play in Liverpool's opening league match of the season at Tottenham on Sunday.

Torres has made a huge impact since signing for the Reds from Atletico Madrid two years ago, scoring 50 goals in 84 appearances.

But, despite interest from rival Premier League clubs Manchester City and Chelsea, Torres has now pledged his long-term future to Liverpool.

The deal replaces the six-year contract Torres signed in July 2007.

"Every major side would want him in their team, but he has shown how much he wants to achieve success at Liverpool by committing his future to the club," said manager Rafael Benitez on the club's official Web site.

"He's a special talent, but still has the hunger to improve his game."