(CNN) -- Aston Villa produced a stunning dispay to win 3-1 at Anfield on Monday night as Liverpool slumped to their second English Premier League defeat in nine days, the same number that they lost in the whole of last season. 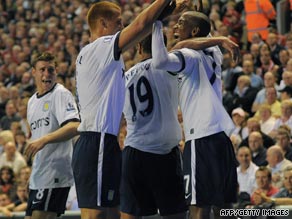 Villa's first win of the season, and their first at Anfield since 2001, also ensured Liverpool lost their 31-match unbeaten home league record -- which stretched back to December 2007 when Manchester United were the last winners.

A Lucas own goal and a Curtis Davies header saw Villa 2-0 up at the break. Fernando Torres pulled one back but an Ashley Young penalty settled the points.

Villa took a 33rd-minute lead when Young floated a free-kick towards the nearpost and Brazilian midfielder Lucas rose to head the ball past his own goalkeeper Pepe Reina.

Then, on the stroke of half-time. Nicky Shorey's corner was headed home by defender Davies at the near post.

Liverpool fought back in the second-half and Dirk Kuyt hit the post with a header from Steven Gerrard's left-wing corner.

With 18 minutes remaining, Liverpooly gave themselves some hope when Emiliano Insua got down the left and rolled the ball into the six-yard box for Fernando Torres to score.

However, Villa made the points safe just two minutes later when Shorey's pass fell into the path of Nigel Reo-Coker, and the midfielder's surge into the area was halted by Gerrard's desperate tackle. It was a clear penalty and Young stepped up to restore Villa's two-goal lead.

Liverpool tried in vain to mount a response but Villa never looked like conceding and Rafa Benitez's side already face a huge task if they are to have a say in this year's title race.

Villa manager Martin O'Neill told ESPN: "I'm delighted with the performance, I couldn't be more pleased. We put absolutely everything into the game, not just effort but skill and ability.

"We had a sluggish start on the opening day and to come and win here against maybe one of the championship favorites was a terrific effort.

"At 2-0 we seemed in reasonable command of the game, it goes to 2-1 and so we had to react pretty quickly. We got a goal through the penalty -- and it was a penalty - and got ourselves back in again. We deserved to win."