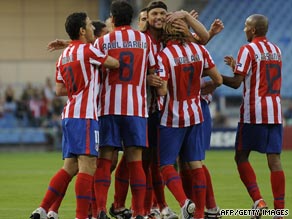 Atletico Madrid celebrate their opening goal as they reachyed the group stage of the Champions League.

Leading 3-2 from the first leg in Athens, Atletico needed just five minutes to further strengthen their stranglehold on the tie when Panathinaikos defender Loukas Vintra put through his own net.

A deep cross from John Heitinga picked out Diego Forlan running in towards the far post, and although the Uruguayan failed to direct his volley goalwards, the ball still ended up in the net as Vintra sliced his attempted clearance past goalkeeper Mario Galinovic

That was a huge setback for the Greek side and their hopes of staging an unlikely fightback suffered a further blow midway through the second half when striker Djibril Cisse was sent off for a bad challenge on Paulo Assuncao.

The Spanish side made the game safe seven minutes from time when Sergio Aguero fired through the legs of Galinovic.

Meanwhile, a first-half hat-trick from Lisandro Lopez sealed the most comprehensive of wins as Lyon strolled past Anderlecht 8-2 on aggregate.

Lopez, who scored one in the first leg as Lyon won 5-1, was on target in the 26th, 32nd and 41st minutes as the French side booked their place in the main draw for the 10th successive year.

Matias Suarez pulled one back from the penalty spot six minutes into the second half, but it did not stop the tie being one to forget for the Belgian side.

In the night's other matches, Israeli side Maccabi Haifa booked their place in the group stage with a 3-0 win at home to Austrian side Salzburg in the second leg of their play-off to seal an emphatic 5-1 aggregate success.

Vladimer Dvalishvili opened the scoring in the 31st minute for the hosts and teenager Eyal Golasa made it two shortly before the hour mark. Mohammad Ghadir added a third in the 90th minute.

FC Zurich also wrapped up a 5-1 aggregate win, knocking out Latvian side Ventspils. The Swiss outfit won 2-1 on the night thanks to a 90th-minute winner from Almen Abdi. Johan Vonlanthen had put them ahead in the sixth minute, only for Igor Tigirlas to level two minutes later.

Debrecen completed a 4-1 aggregate win over Levski Sofia with a 2-0 victory in Hungary . Two away goals in the Bulgarian capital last week had put Debrecen in the driving seat and they duly finished off the job thanks to efforts from Jozsef Varga (13) and Gergely Rudolf (36).

Meanwhile, holders Shakhtar Donetsk are through to the group stages of the Europea League after beating Sivasspor of Turkey 2-0 for a 5-0 aggregate win.