(CNN) -- Inter Milan coach Jose Mourinho is under fire from a Muslim leader in Italy after his criticism of Sulley Muntari for fasting during Ramadan. 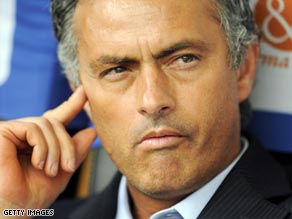 Mourinho was unhappy with the performance of Muntari and his team on Sunday.

Ghana midfielder Muntari was taken off after just half an hour of Inter's disappointing 1-1 home draw against Bari as they began their defense of the Serie A title on Sunday.

Mourinho pulled no punches in the post match press conference when he implied that the former Portsmouth star had played poorly because he lacked energy due to his fast.

"Muntari had some problems related to Ramadan, perhaps with this heat it's not good for him to be doing this, " Mourinho told reporters.

"Ramadan has not arrived at the ideal moment for a player to play a football match."

The former Chelsea manager, who is renowned for his outspoken comments, even suggested that Muntari would be dropped for this weekend's derby match against city rivals AC Milan.

But his comments were seized on by Mohamed Nour Dachan, president of the union of Islamic communities in Italy.

"I think Mourinho could do with talking a little less," he told SKY TV.

Dachan said that Muntari would gain mental strength from his Muslim beliefs to help him overcome the handicaps of fasting during daylight hours.

"A player who is a believing Christian, Jew or Muslim is certainly calmer pyschologically and that improves his performance," he claimed.

Whether Mourinho carries out his threat to drop Muntari is open to questions because Sunday's match in the San Siro kicks off after sundown in Italy, leaving the player some time to rehydrate.

Meanwhile, the Egyptian team preparing for the under-20 World Cup in their home country have turned down the chance to break their fast.

The country's religious authorities gave the squad members permission to avoid fasting during Ramadan, but the team ignored the instruction.

The competition starts just a few days after the end of Ramadan, but the team is in strict training in a bid to claim the prestigious title.