(CNN) -- Chelsea captain John Terry has been rewarded for his decision to stay at Stamford Bridge with a lucrative new five-year deal. 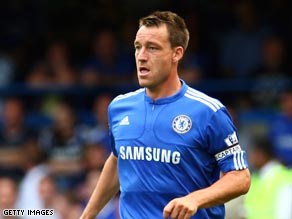 Terry has commited his future to Chelsea until the end of the 2013-14 season.

The England international defender was the major close season transfer target for cash-rich Manchester City and looked on the brink of a move to Eastlands.

But Terry rejected their overtures after being promised an improved deal by new manager Carlos Ancelotti.

Chelsea confirmed on their official Web site on Monday that Terry had signed on the dotted line until 2014.

"Chelsea is delighted to confirm that John Terry has signed a new five-year contract that keeps him at the club until the end of the 2013-14 season.

"This reaffirms both John's and Chelsea's long stated desire for John to be at Stamford Bridge for the rest of his playing career."

Newspaper reports suggested that Terry will be earning up to $81 million over the length of the contract, making him the highest paid player in the English Premier League.

The 28-year-old central defender has started the season in commanding style as Chelsea top the Premier League after four straight wins.

He has been at Chelsea since joining as a teenager and has made 276 appearances in 12 seasons as a professional, leading the club to two English titles, four FA Cup wins, three League Cups and the now-defunct European Cup Winners Cup.

Terry had two-years to run on his old contract but with Manchester City manager Mark Hughes making no secret of his desire to sign the 54-capped England international, Chelsea moved quickly to secure his services.

All About John Terry