(CNN) -- Arsenal striker Eduardo has been slapped with a two-match ban by European football's governing body UEFA for diving to win a penalty against Celtic last week. 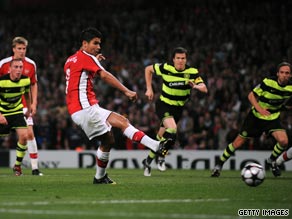 Eduardo scored from the penalty spot after going down under the challenge of Celtic keeper Artur Boruc.

The Croatia international went down when there appeared to be minimal -- if any -- contact with visiting goalkeeper Artur Boruc in the Champions League qualifier.

He got up to score the opening goal from the penalty spot as the English club went on to beat their Scottish rivals 3-1 and progress into the group stages of Europe's premier club competition.

UEFA announced on Tuesday that its control and disciplinary body had suspended the Brazil-born 26-year-old "for deceiving the referee."

He will now miss Arsenal's Champions League trip to Belgian club Standard Liege on September 16, and the home clash with Greek side Olympiacos on September 29.

Arsenal have three days in which to appeal, and said in a statement on the club Web site that they will wait until receiving a "reasoned decision" from UEFA on Thursday before making any move.

"We have been deeply frustrated by the perfunctory and apparently arbitrary process that UEFA has followed in this instance," the club said.

"We believe it is imperative that UEFA's explanation for its decision provides clear and comprehensive standards that will be consistently enforced. It is also critical that UEFA provides specific details of the processes it plans to adopt in reviewing all games under its jurisdiction."

Given that statement, and manager Arsene Wenger's earlier accusations of a "witch hunt" by UEFA, an appeal seems likely.

"I find it a complete disgrace and unacceptable. We won't accept the way we have been treated in this case for two reasons," Wenger said last week.

"I believe that you can debate whether it was a penalty or not. For me it's a witch-hunt that we see and not an objective judgment of a case.

"This charge implies there was intent and a desire to cheat the referee. Having watched the pictures again there was nothing conclusive.

"It singles out a player in Europe to be a cheat and that is not acceptable. UEFA has taken action that is not defendable."

The focus on the Eduardo incident and the issue of "simulation" has already had some impact, with Celtic winger Aidan McGeady sent off after being booked for diving in his team's Scottish Premier League match against Hibernian on Sunday.

Meanwhile, Liverpool manager Rafael Benitez has been charged with improper conduct by the English the Football Association for criticizing the referee after the season-opening defeat to Tottenham.

Benitez was angry when Phil Dowd did not award a late penalty for a challenge on substitute Andriy Voronin by Benoit Assou-Ekotto in the 2-1 setback, and was also aggrieved when an apparent handball by the Spurs defender also went unpunished.

He has until September 15 to respond to the charge.

"I think everyone could see there was a penalty, especially to Voronin, it was so clear," the Spaniard said after the game.

"The third one, you could excuse. You can say that the hand was to the ball or the ball was to the hand, it could be, but the other one was so clear, it was unbelievable.

"Can you get two penalties at an away ground? No. With this referee, I knew that this was impossible."

Liverpool did receive a penalty earlier in the match when home goalkeeper Heurelho Gomes was adjudged to have brought down Glen Johnson.