(CNN) -- Five-times world champions Brazil booked their place at next year's World Cup finals in South Africa with a 3-1 win in Argentina that keeps the home side's qualification prospects -- and coach Diego Maradona's future -- in the balance. 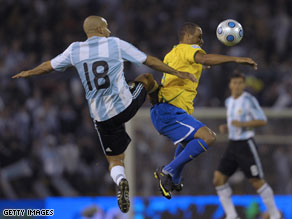 The visitors seized control early on in Rosario with defender Luisao heading them into the lead on 24 minutes and Luis Fabiano doubling their advantage from close range six minutes later.

Jesus Datolo briefly pulled Argentina back into contention with a spectacular strike from outside the penalty area but Brazil regained their two-goal advantage just two minutes later when Kaka plated in Fabiano to neatly claim his second goal of the night.

The win maintains Brazil's unique record of qualifying for every World Cup since the tournament began in 1930.

"We knew it was going to be tough, but I told my players that if we finished the game with all the players on the field, we were going to win it," said Brazilian coach Dunga, who lifted the World Cup as captain of his country in 1994.

"We tried to play tough, firm, but trying to not get carded. We always tried to play. Brazil were very focused on the game all the time, trying to play with speed in the right moments."

Argentina remained in the fourth automatic South American qualifying spot but only because of Ecuador's 2-0 defeat in Colombia and now face a crucial clash with third-placed Paraguay on Wednesday.

"We must keep working hard and go to Paraguay to try to win," said Maradona. "It will not be easy, especially after tonight's defeat because we thought we were going to win. Losing to Brazil is not nice at all."

With three games to play, Brazil lead the South American group with 30 points, three clear of Chile and Paraguay, who both remained on course Saturday to claim two of the three remaining qualifying berths.

Salvador Cabanas' first half penalty gave Paraguay a 1-0 win over Bolivia in Asuncion, while Rodrigo Millar's second-half equalizer rescued a 2-2 draw for Chile in Santiago against Venezuela.

Argentina trail in fourth on 22 points, just two clear of Colombia and Ecuador. The fifth-placed team faces a two-leg playoff against the third-placed team in the CONCACAF North American qualifying zone.