Would the World Cup miss Argentina?

(CNN) -- They are football's royalty, the marquee players whose almost super human ability on the ball wins cups and championships; their faces adorn billboards and magazine covers from China to Colombia. 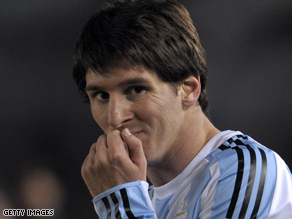 Lionel Messi could miss out on the 2010 World Cup if his team Argentina fail to improve.

But, amazingly, the likes of Lionel Messi, Cristiano Ronaldo and Thierry Henry may all be absent from the World Cup finals in South Africa.

Qualification for next year's tournament has thrown up a host of surprise results with a number of top teams, including Argentina, Portugal, France and Egypt all in serious danger of missing the tournament.

The highest profile strugglers are Diego Maradona's Argentina, who were defeated by Paraguay in the last round of qualifiers and remain outside of the automatic promotion places in their group. Would you miss Argentina at the World Cup finals?

Portugal, featuring World Player of the Year Cristiano Ronaldo, are playing catch up to Sweden and Denmark in their group and may not even make the playoffs.

Add fellow-strugglers France to the mix and, suddenly, Africa's first World Cup could be remembered more for the teams that didn't make it, rather than for those that did.

But would the failure of football's heavyweights to qualify for the World Cup necessarily be as apocalyptic as many have suggested? Does it actually open the door for less established football nations to write their own sporting histories?

When England failed to qualify for the 1974 World Cup, just eight years after lifting the Jules Rimet trophy, it was a relatively unknown Polish side that benefited.

The Poles went on to take the tournament by storm, losing the semifinal to eventual winners West Germany 1-0.

"The Polish team was just as perfectly structured as our team in 1972," admitted Paul Breitner, the German defender who scored the opening goal in the final against the Netherlands, to FIFA.com.

Other teams have also benefited from the profligacy of more established footballing nations.

Portugal were pipped to the 1982 World Cup in Spain by Northern Ireland, then the smallest national association to ever qualify for the finals.

The team went onto to set the tournament alight, disposing of the hosts en route to the quarterfinals.

And the great Bulgarian trio of Hristo Stoichkov, Yordan Letchkov and Trifon Ivanov would never have shone on the world stage at USA 94 if their team had not qualified at the expense of a talented France side containing the likes of Eric Cantona, Jean-Pierre Papin and David Ginola.

This year a host of talented minnows like Gabon, Bosnia and Bahrain are all hoping to take advantage and make it to their first-ever finals.

Whilst the likes of Argentina take qualification for granted, an appearance at the World Cup for a fledgling nation can have a dramatic social, as well as sporting, effect as qualification by Cameroon, Iran and South Africa has proved in the past.

For other teams coasting towards South Africa, though, the failure of the bigger teams brings unexpected benefits.

"It's good for England," explained England captain John Terry before his team's qualifier against Croatia tonight. "When we didn't qualify, I went back to Chelsea and the attitude of the foreign players was: 'We have a better chance of winning the World Cup.' First and foremost, we think about ourselves. If we go there without some big teams in the competition, then it's even better."

What do you think? Would the World Cup really miss Argentina, Portugal or France? Or would a new generation of stars step in to fill the void?