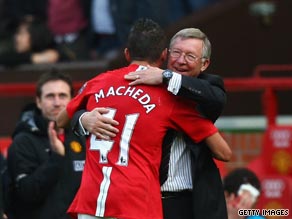 The Italian club are contemplating a formal complaint to FIFA following the departure of the 16-year-old player to the English Premier League outfit in July, though United remain confident of their legal position.

It is illegal for players under the age of 18 to sign contracts in Italy, consequently Fornasier was not contracted to the Serie A club when he was signed by United.

A FIFA spokesman told Press Association Sport: "FIFA can confirm that we were contacted by Fiorentina with regard to the potential transfer of the player, Michele Fornasier, to Manchester United.

"However, so far no formal investigation was opened since the relevant documentation still needs to be completed. Only then will we be in a position to evaluate possible future steps to be taken."

Fornasier is not the first Italian teenager signed by United - striker Federico Macheda joined from Lazio when he was 16, and another defender, Alberto Massacci, joined from Empoli during the off season.

Earlier in the week United threatened French side Le Havre with legal action over claims that the transfer of teenager Paul Pogba to Old Trafford was conducted improperly.

The news comes on the back of the transfer ban placed on fellow Premier League side Chelsea by FIFA.

The punishment, which would prevent any new member joining the squad until 2011, was dished out after the club was found to have "induced" Gael Kukuta to breach his contract in a transfer from French league side Lens in 2007.

The complaint that Chelsea had acted improperly over the transfer of the 18-year-old left-winger was referred to the body's Disciplinary Resolution Chamber (DRC) who decided to impose a ban on any further player recruitment by last season's Champions League semifinalists.

Manchester City could also receive a transfer ban after being reported to FIFA by French side Stade Rennes over an alleged illegal approach for a youth player.

FIFA have confirmed they would be investigating City's acquisition of 17-year-old defender Jeremy Helan in February.