(CNN) -- Chelsea coach Carlo Ancelotti is optimistic that the transfer ban imposed on the club by world governing body FIFA will not immediately impact on their English Premier League title ambitions. 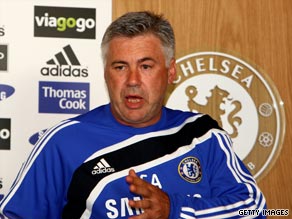 Carlo Ancelotti is confident that he already has a strong enough squad to challenge for trophies.

The punishment, which would prevent any new member joining the squad until 2011, was handed out by FIFA after Chelsea were found to have 'induced' teenager Gael Kukuta to breach his contract in a transfer from French league side Lens in 2007.

Chelsea have appealed through the Court of Arbitration for Sport in an attempt to get the decision overturned.

"The decision by FIFA was a surprise for me but now the club are appealing the decision and we have to wait for a good result for us. We hope they overturn the decision," Ancelotti told Chelsea's Web site.

"Now this is not a problem because we have a very good team, very good players, we don't need to have other players.

Should Ancelotti be worried about FIFA's decision? Sound Off below.

"For the future we have to wait because I am sure FIFA can change this decision.

"To have John Terry, Frank Lampard and Didier Drogba here for the next few years is very important. Now my job is very simple because I have in the team a very good mental attitude.

"I was surprised about the ban because I didn't know the situation, but now I have to focus on my job and on my players."

Under the terms of the ban Chelsea are also not allowed to recall any players who are on season-long loans.

Ancelotti had hoped minimize the damage by recalling Michael Mancienne from Wolves, Scott Sinclair from Wigan and Franco di Santo from Blackburn.

Argentinean striker Di Santo can return, as his agreement was only for half the season, but Sinclair's was for the full season and in Mancienne's case, FIFA will have to rule on whether an 'emergency release clause' can be applied.

"If it's a season-long loan, it cannot be terminated in order to bring players back," a FIFA spokesman told the UK Press Association.

The club expect to hear from FIFA in the next 10 days with their full reasoning behind the transfer ban.

Ancelotti also confirmed that Yuri Zhirkov, who moved to Stamford Bridge in July for $30 million, does not require surgery on a knee problem.

The Russian midfielder has yet to make an appearance for the club but Ancelotti is confident the player will not go under the knife.

"Now, at the moment, we don't think he needs surgery. He's working with the team. Yesterday he worked with us," he said on Saturday.