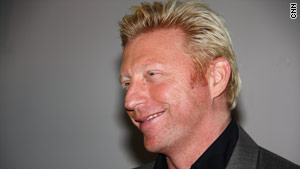 (CNN) -- They may be famous, but even the world's biggest names go weak at the knees for their favorite football team. Football Fanzone talks to tennis legend Boris Becker about his true number one passion: German giants Bayern Munich.

Why do you support Bayern Munich?

I am a big fan of Bayern and have been for years. I've actually been on the advisory board for ten years. Every German kid, before they walk and before they can talk, they love their football. It is similar story for me. Before I was a tennis player I was a football player [and supporter].

So you can say that your first love was football?

Football is as much of a love as tennis.

Of all the players who have played for Bayern down the years, which have stood out the most?

We'll have to start with "The Kaiser", Franz Beckenbauer. He was obviously the captain of the team, and a World Cup winner, but he also won lots of national and international awards. So he was the standout. But you also had Gerd Muller, Sepp Maier, many superstars. Until now it was the most prominent club in the country. Since the 1970s it was the most successful, the richest and had the biggest fan base. Munich is the club you want to root for.

Bayern had a tricky season last season, losing out to Wolfsburg for the title. Are you optimistic for this season?

"We have got a new Dutch player, [former Chelsea and Real Madrid winger Arjen] Robben, who I think is going to make all the difference in the world."
--Boris Becker

True, Wolfsburg had an incredible run, but we call this a bad season because we finished second. You can imagine the standards here. This year it is not much easier with a new coach Louis Van Gaal. We've not had the greatest of starts but we have got a new Dutch player, [former Chelsea and Real Madrid winger Arjen] Robben, who I think is going to make all the difference in the world.

Can Bayern recover from this season's slow start under Van Gaal?

If you were manager of Bayern at the moment would you change anything?

I would be a little worried about the defence. We let, in my opinion, one of the best defensive players we have ever had go, [Brazilian international] Lucio, who went to Inter Milan. I don't know why or what happened but I don't think we are as strong defensively as we are offensively. We have to score at least three goals to win now!

Fact Box
Boris Becker shot to fame when he won Wimbledon as a 17-year-old in 1985. He went on to win five more Grand Slams in his career.

Becker retired in 1999 and now commentates on the major tournaments. He also has his own clothing and equipment firm: Boris Becker Tennis.

You travel around the world a lot and have a lot of commitments due to your tennis. How do you keep up with Bayern and how does your fan nature come out in your life?

We are living in the world of technology, the internet and the media. So it's particularly easy to keep up with the latest gossip and the results. But I am still quite often in Munich and I watch the club and talk to the players.

Do you have a favorite piece of memorabilia?

I have the shirt and go as often as I can. I was part of their heart breaking loss against Manchester united in Barcelona in the Champions League [final]. I was in the stadium and after I was with the players crying together. Then I was in Milan two years later and we won in the penalty shoot out against Valencia and I was celebrating with them afterwards. Those were my two most memorable moments.