Football First 11: Do or die derbies 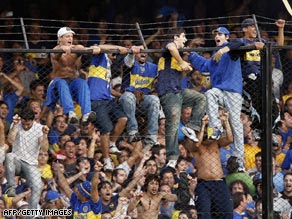 At the River Plate and Boca Juniors matches, the atmosphere can swell to boiling point.

But while the Manchester derby certainly stirs the passions, Football Fan Zone has scoured the world to select 10 other local match ups which stir the emotion of the club's faithful.

Do you agree with our selection ? Tell us about one you think should make the top 10 in our Sound Off box below.

These two are the bitterest of bitter rivals. Not only are they divided by football, but by religion as well, with Rangers taking their support from the Protestant community and Celtic the Catholic community. The hostility has become so intense that both clubs have asked their fans to stop singing the sectarian songs that had become commonplace on match days.

To add fuel to the fire, they are consistently the only two teams who challenge for the Scottish title, with the make-up of the Premier League ensuring they face each other four times in a season, not including cups. Despite both clubs attracting some top foreign stars, the helter-skelter nature of the fixture has not been diluted over time, as confirmed by the number of dismissals over the years.

Undoubtedly the fiercest derby match in Italy, these two rivals really hate each other. Violence in and around the Olympic Stadium between the sets of supporters, and the police, has become an all-too-common occurrence in recent seasons. Both teams hate the perceived arrogance from the Northern cities (Milan, Turin) -- but they loathe each other more.

Roma take their support from a traditional working-class fan base, while Lazio's support tends to come from the wealthier districts. The historical political differences between the fans is another reason for this rivalry. Lazio's supporters, in general, followed right-wing ideals while the Roma fans leaned more to the left.

Although by no means the most "local" derby in South America (the clubs are about 7km apart), it is undeniably the most intense. The rivalry, hatred and violence involved are based on social class and money.

Both clubs were founded in the poor district of Buenos Aires called La Boca, but River Plate moved to a wealthier area called Nunez in the 1930s, heightening the animosity between the clubs. Boca Juniors' stadium is known as "La Bombonera" (The Box of Chocolates) because of its layout. The steep stands and the lack of a running track makes for a particularly intimidating atmosphere.

Arguably Africa's most passionate derby, this match brings together two of the continent's most successful clubs. Their rivalry is so strong that foreign referees are always brought in for the derby games and, following a number of violent incidents, matches between the two have been moved to the 75,000 capacity Cairo International Stadium. On the pitch, Al Ahly currently have the upper hand, winning the last four league titles.

The Bosphorus separates the city of Istanbul into a European side and an Asian side. Galatasaray, on the European side, have traditionally been the wealthier of the two clubs, while Fenerbahce, on the Asian side, have a largely working-class following. However, in recent years, Fenerbahce have attracted a number of wealthy fans who have pumped money into the club, thus unbalancing the equilibrium. Nowadays, there is nothing to choose between them on and off the pitch. The last five league titles have alternated between the two clubs and both clubs have won 17 Turkish championships.

This is the derby between the two giants of Greek football, although the rivalry between the two also exists in basketball, Greece's national sport. In the past, Olympiakos, from the port area of Piraeus, used to represent the working class, while Panathinaikos represented the upper-class suburbs of Athens. Nowadays, the situation has evened out. However, on the pitch, Olympiakos are the dominant club, having won 11 of the last 12 league titles, including the last four in a row.

This is a relatively new fixture: both clubs were founded in 1945, but what they lack in age, they make up for in passion. Partizan was founded as the football section of the central club of the former Yugoslavian Army, while Red Star was founded as the civilians' club. Red Star, or Crvena Zvezda as they are now known, have traditionally been the more successful, achieving the ultimate of winning the European Cup in 1991.

These two are the biggest clubs in Morocco and violence between the fans often mars these fixtures. Wydad used to dominate honors, but in recent seasons Raja have enjoyed more success. N.B. Raja means "hope" and Wydad means "love," although there is certainly no love between the rivals when they face each other!

Another derby that has been going for nearly 100 years. Corinthians used to be the only club in the city, but a group of Italian members broke away to form Palmeiras, earning the nickname of the "betrayers" by Corinthians fans. Morumbi is the biggest stadium in Sao Paulo and all the derbies are played there, although the Pacaembu stadium, which hosts many Corinthians matches, is also used for the occasion.

One of the oldest derby matches in the world, with both clubs being formed in the 1890s. The two most honored clubs in Uruguay, they share a remarkable 85 Uruguayan league titles and eight Copa Libertadores championships between them. The derby is always played in the Centenario Stadium, with a capacity of almost 74,000, although Nacional also have their own ground in a different neighborhood of the city.

Who are your fiercest rivals? Do fiery derbies hurt or hinder football? What is your favorite local match? Tell us your opinions in the Sound Off box below.