(CNN) -- Diego Maradona has threatened to quit as Argentina coach next week unless certain terms and conditions are met. 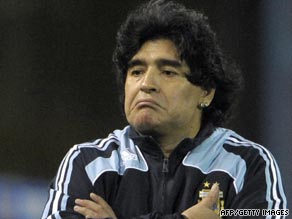 Maradona's future as Argentina national coach will be clearer after their upcoming World Cup qualifiers.

Argentina play their final two World Cup qualifiers in the upcoming week, against Peru and Uruguay, with their place in South Africa still very much in the balance.

However, Maradona has revealed he is thinking of resigning from his post even if they qualify and will meet with Argentina football association president Julio Grondona to discuss matters.

"When Grondona called me to his house and offered me the job, I told him I was the happiest person in the world," Maradona told reporters.

"But after that things happened that I didn't like and I will speak about them later. If I continue it will be under my conditions. After the qualifiers I will talk to Julio."

Maradona, who has been in the post less than a year, did not specify what conditions he would lay down, but it is thought his chief gripe is with technical director Carlos Bilardo.

The pair reportedly do not get on and barely speak to each other, with Maradona unhappy at the former Argentina coach's interference in team affairs.

Argentina go into Saturday's qualifier in Buenos Aires on a run of four defeats in the last five games, and currently lie in the play-off position in the South American zone.