(CNN) -- Didier Drogba came off the bench to rescue a point for Ivory Coast as they drew 1-1 with Malawi on Saturday to book their place at the 2010 World Cup in South Africa. 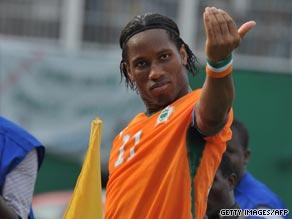 Didier Drogba scored for Ivory Coast as they drew 1-1 with Malawi to book their place at the 2010 World Cup in South Africa.

Ivory Coast needed only a point from their match with the bottom-placed team in African qualifying Group E but found themselves a goal down in the 64th minute when Jacob Ngwira put the hosts ahead at the Kamuzu Stadium in Blantyre.

Elephants coach Vahid Halilhodzic responded by throwing on Chelsea striker Drogba who was able to level the scores in the 67th minute.

Malawi pushed for a winner as the second half wore on but were unable to add to the score and Ivory Coast secured the point they required for qualification.

The result brought Ivory Coast's 100 percent run in the group to an end but ensured they will feature in the World Cup Finals for a second time following their debut appearance in 2006.

Malawi also improved their chances of qualifying for the African Cup of Nations by moving third with four points, just behind Burkina Faso who have six and Guinea who are now last with three points.

Elsewhere in the African qualifying zone Egypt recorded a 1-0 win over Zambia in their Group C clash in Konkola to potentially set up a deciding match with Algeria in Cairo next month.

Egypt were on the back foot in the first half and were indebted to goalkeeper Essam El-Hadary who frustrated the Zambia fans with several fine saves as the visitors struggled to get to grips with the pitch at the Konkola Stadium.

But the Pharaohs were a much-improved side after the half-time break and Hosny Abd-Rabou secured all three points with the only goal of the game in the 68th minute.

Egypt defender Sayed Moawad laid off the ball for Abd-Rabou to fire a powerful right-footed shot past Zambia goalkeeper Kennedy Mweene and into the top corner of the net.

The result means qualification will go right down to the wire even if Algeria take maximum points from their clash with bottom side Rwanda on Sunday and go three points clear of Egypt at the top of the group.

Cameroon moved a step closer to qualification as they remained top of Group A with an emphatic 3-0 victory over Togo in Yaounde.

The Indomitable Lions took the lead in the 32nd minute through Newcastle midfielder Geremi when he smashed home the rebound after Togo goalkeeper Kodjovi Obilale had saved his initial shot from the penalty spot.

Lyon's Jean Makoun doubled the advantage two minutes after the interval after he tapped home following a mazy dribble by Samuel Eto'o and Achille Emana made the points safe in the 52nd minute with a low drive.

Gabon remain a point behind Cameroon after they clinched a 3-1 win over Morocco in Libreville having taken the lead after Hicham Mahdoufi put through his own net moments before half-time.

Eric Mouloungou and Daniel Cousin gave Gabon a three-goal lead before Adel Taarabt pulled one back for Morocco with a late consolation.

Paul Le Guen's Cameroon side, who had looked doubtful to qualify when he took over, are in pole position at the top of the group with 10 points ahead of Gabon on nine, Togo on five and Morocco with three.