(CNN) -- Mexico and the United States will be going to the 2010 World Cup finals after winning their penultimate matches in CONCACAF qualifying on Saturday night. 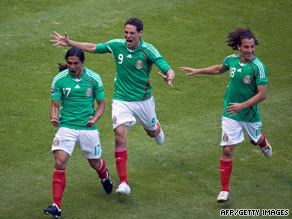 Francisco Palencia (left) celebrates his goal as Mexico secured their place in the finals.

Mexico, who struggled in their earlier qualifying matches while former England coach Sven-Goran Eriksson was in charge, had an easy 4-1 home win over El Salvador, while the U.S scored a memorable 3-2 victory in Honduras.

The wins keeps the U.S. top of the group with 19 points from nine games with Mexico a point further adrift.

Costa Rica won 4-0 against Trinidad and Tobago to move into the third and final qualifying spot in the group ahead of next Wednesday's final round of matches with Honduras one point behind them.

The fourth-placed team in the CONCACAF group face the fifth-placed team from South America, which could be Diego Maradona's Argentina, in a playoff for a World Cup place.

Honduras will be ruing lost opportunities against the Americans as they led through Julio De Leon goal early in the second half before Conor Casey scored twice for the visitors to put them ahead.

De Leon scored the equalizer before Landon Donovan curled home a free kick in the 70th minute to give the visitors the lead again.

Still the drama was not over and Honduras were awarded a penalty in the 86th minute after a handball by Stuart Holden but Carlos Pavon, the leading scorer for Honduras in internationals, sent his effort over the crossbar.

Mexico scored three goals in the last 20 minutes after an own goal from Marvin Gonzalez of El Salvador had put them 1-0 up in the 25th minute.

Cuauhtemoc Blanco gave the hosts a 2-0 lead in the 70th minute and Francisco Palencia added a third.

Julio Martinez scored a consolation for El Salvador in the 87th minute before Arsenal's Carlos Vela rounded off the scoring for Mexico as they sealed their place.

Alvaro Saborio scored twice and Walter Centeno added another, after Radanfa Abubakr's own goal had put them on their way.