(CNN) -- David Beckham looks set to rejoin AC Milan on loan after the vice-president of the Serie A giants claimed it was "very probable" that a deal would be reached to secure the services of the soccer icon. 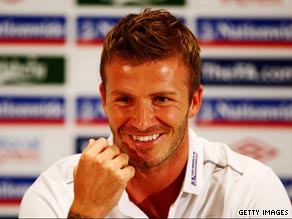 Beckham is desperate to extend his England career until the 2010 World Cup finals.

Los Angeles Galaxy midfielder Beckham sparked controversy last season when he extended his loan with Milan until June and missed the start of the Major League Soccer season in the United States.

When he returned to play for the Galaxy he received a mixed reception and was involved in well-publicized confrontations with irate fans as well as a war of words with teammate Landon Donovan.

But with Galaxy securing a place in the MLS playoffs which start on October 29, reaction to Beckham going to Milan again is more favorable.

Adriano Galliano confirmed on Monday that Milan, who have made an indifferent start to the Italian season, are keen for the 34-year-old to return in January.

"It's very probable that Beckham will come to Milan on loan until June 30, but I don't give anything as fact until there's a signature," the Milan chief told reporters at a sports convention in Monte Carlo.

Beckham, who is currently with the England squad for their final World Cup qualifiers against the Ukraine and Belarus on Wednesday, has been told by national team boss Fabio Capello that he must be playing in top-flight European club competition to be considered for the World Cup finals in South Africa.

The former Manchester United and Real Madrid star is desperate to make a fourth appearance in the World Cup finals and will be heartened by the reaction of his U.S. paymasters.

Tim Leiweke, the chief executive of AEG which owns Galaxy, told Sky Sports News: "We know he has to be playing in Europe leading up to the World Cup. That has been made clear to us, and we are going to support that.

"He will be somewhere come January, and we will see him back in July.

"We have a contract - and despite people thinking we're going to sell him, we're not. David is going to finish his career with the Galaxy."

Beckham faces fierce competition to gain a place in the England squad for South Africa with Tottenham Aaron Lennon currently occupying his position on the wide right, with competition from Shaun Wright-Phillips and the returning Theo Walcott also a factor.

He did not play any part in England's 1-0 defeat to the Ukraine but is expected to see action against Belarus at Wembley.