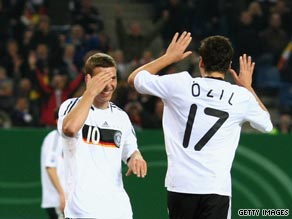 Ozil and Podolski celebrate Germany's late equalizer in their 1-1 draw against Finland in Hamburg.

Germany had already secured a place in the finals in South Africa with a 1-0 win over Russia on Saturday, but were hoping to sign off their style in campaign in style in front of their hope fans.

Their problems started in the 11th minute as Jonatan Johannsson put the Finns ahead.

German coach Joachim Loew had rested Bastian Schweinsteiger, Miroslav Klose and Per Mertesacker, but still fielded a strong side including Lahm and captain Michael Ballack.

But they were lucky not to fall further behind as Eremenko saw a shot saved by Rene Adler and Jani Litmanen had a goal disallowed for offside.

Loew brought on Klose in the second half and just as Stuart Baxter's men looked set to give Finland their first win over Germany for 86 years the home side drew level.

Werder Bremen midfielder Mesut Oezil sent over a cross which Klose helped on to Podolski to fire home.

In the other group game, Russia, who have secured a playoff spot despite losing in Moscow to the Germans, drew 1-1 with Azerbaijan.

Vagif Javadov scored a second-half equalizer for the home side after Andrei Arshavin gave Russia a 13th minute lead.

Meanwhile, Alberto Gilardino scored a hat-trick in the last 13 minutes to cap a remarkable turnaround for Italy, as the world champions beat Cyprus 3-2 in Parma.

Gilardino, whose last-gasp equalizer against Ireland on Saturday clinched top spot in Group Eight, ensured the Azzurri remained unbeaten in their qualifying campaign with a stunning treble.

Yiannis Okkas opened the scoring for the visitors in the 12th minute before Chrysostomos Michail extended Cyprus' advantage early in the second half.

But Gilardino's heroics saved Italy's blushes in the final stages. He reduced the deficit 12 minutes from time, adding the equalizer three minutes later before scoring the winner in the dying seconds when stretching to tap home Fabio Quagliarella's cross.

Republic of Ireland had already secured second place in the group but they ended their campaign with a disappointing 0-0 home draw against Montenegro in Dublin.

Serbia's qualifying campaign ended on a disappointing note with a 2-1 defeat to Lithuania in Marijampole.

Four days after securing their place in South Africa as Group Seven winners, the Serbs were beaten by penalties from Mindaugas Kalonas and Marius Stankevicius in either half.

Zoran Tosic netted the visitors' reply, but it was not enough to prevent a second defeat in their pool.

Second-placed France, already assured of a play-off spot, avenged their defeat in Austria with a comfortable 3-1 victory in their final qualifier.

Karim Benzema set Les Bleus on their way in the 17th minute and Thierry Henry doubled their tally from the penalty spot 10 minutes later.

Marc Janko pulled one back three minutes into the second half but substitute Andre-Pierre Gignac, who scored twice against the Faroes on Saturday, restored France's two-goal lead with a superb strike.

European champions Spain joined a select group of teams to record a perfect World Cup qualifying record, making it 10 wins out of 10 in Group Five with a crushing victory 5-2 over Bosnia in Zenica.

Spain followed in the footsteps of countries such as West Germany in 1982 and the Netherlands this year by winning all their qualifying matches, sweeping aside the second-best team in their pool thanks to early goals from Gerard Pique and David Silva and two in the second half from Alvaro Negredo on his first start for his country.

Juan Manuel Mata then added a late fifth with his third goal in successive internationals before Bosnia, who were already assured of a spot in the play-offs before this match, pulled two goals back in injury-time from Edin Dzeko and Zvjezdan Misimovic to add a touch of respectability to the scoreline.

Fatih Terim's second reign as Turkey coach came to an end with a comfortable, if unspectacular, 2-0 victory over Group Five's basement side Armenia, despite being reduced to 10 men after Ceyhun Gulselam's first-half red card.

The Turks had not been expected to push Spain in the qualifiers but their inability to challenge Bosnia for second led to Terim's announcement this week that he would stand down after this match.