(CNN) -- Portugal booked themselves a place in the European playoffs for next year's World Cup finals after a comfortable 4-0 Group One victory over Malta. 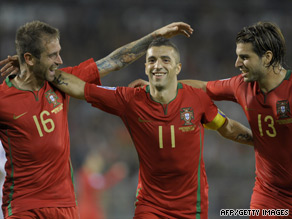 Simao Sabrosa (center) celebrates his goal as Portugal securd their place in the World Cup playoffs.

Goals from Nani, Simao Sabrosa, Miguel Veloso and Edinho made it a comfortable evening for Carlos Queiroz's side in Guimaraes.

Manchester United midfielder Nani calmed any Portuguese nerves by scoring after 13 minutes. Veloso played the ball in from the left and Nani, just outside the 18-yard box, was quick to get his left-footed shot away to find the bottom corner.

The second goal arrived a minute before half-time when Simao rammed home another shot from outside the penalty area.

Portugal's third goal was a crisp finish from Veloso from around 12 yards, after Liedson could not convert Nani's pass, while Edinho converted a pass from Simao for the fourth.

The Portuguese have recovered well after a dismal first half of their bid to reach South Africa, and will fancy their chances of reaching the finals, given they will be among the seeded teams in next Monday's draw

Elsewhere, Ukraine secured a place in the playoffs with a 6-0 rout of minnows Andorra.

The victory left them a point clear of Croatia in the battle for second spot in Group Six behind already-qualified England.

Croatia beat Kazakhstan 2-1 in their final qualifier with Tottenham's Nico Kranjcar scoring a 90th minute winner, but it proved to no avail.

Ukraine defeated England 1-0 in Dnipro on Saturday to leave themselves in prime position to claim one of the eight playoff spots in Europea and made no mistake against Andorra, who failed to win any of their qualifying matches.

Former AC Milan and Chelsea striker Andriy Shevchenko settled their nerves with a 22nd-minute opener but it was not until the second half that victory was sealed with a flurry of goals.

Oleg Gusev, Yaroslav Rakytskiy, Andriy Yarmolenko, an own goal by Ildefons Mima and a further strike by substitute Yevgen Seleznov did the trick for the Ukrainians at the Comunal Stadium.

Croatia, who began the campaign off the back of a successful showing at Euro 2008, had to battle to beat the Kazakhs in Astana.

Midfielder Ognjen Vukojevic had given Croatia the lead on 10 minutes but Sergei Khizhnichenko equalized for the home side midway through the first half.

Kazakhstan goalkeeper Alexander Mokin made a string of fine saves to deny the visitors, but was beaten by Kranjcar's firm header three minutes into added time.

But the results leaves Slaven Bilic's men in a disappointing third place while Ukraine go forward to a home and away playoff series on November 14 and 18 with the four winners going to South Africa.

Needing just a point to qualify, the Swiss did just enough against an Israel side reduced to 10 men in the 59th minute when Avihay Yadin received his second yellow card.

Switzerland finish the campaign on 21 points, one ahead of Greece who secured the playoff spot after a scrappy 2-1 home victory over Luxembourg.

Vasilis Torosidis headed the Greeks in front on the half-hour mark and Theofanis Gekas, scorer of four goals in Saturday's 5-2 win over Latvia, added a second three minutes later.

Ben Payal was dismissed for the visitors in the 58th minute after being shown a second yellow card, although they did score a consolation goal when Avraam Papadopoulos turned a cross past his own goalkeeper Michalis Sifakis.

Elsewhere, Slovakia qualified for their first-ever World Cup finals after beating Poland 1-0 in Chorzow thanks to a third-minute own goal from defender Seweryn Gancarczyk.

The result means Slovakia finish top of Group Three, two points ahead of Slovenia who secured their playoff place with a comfortable 3-0 win at minnows San Marino.

Czech Republic had an outside chance of reaching the playoffs, but they were held 0-0 at home by Northern Ireland, a result that extinguished their hopes.

The Czechs, who played at the 2006 World Cup finals and all Euro tournaments between 1996 and 2008, started the 2010 campaign as strong favorites but have disappointed throughout qualifying.