(CNN) -- David Beckham has confirmed that he is almost certain to return to Italian club AC Milan on loan when the transfer window re-opens in January. 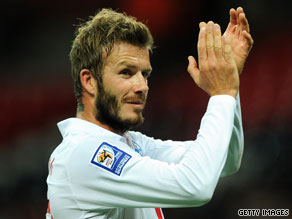 David Beckham has helped LA Galaxy reach the MLS playoffs for the first time since 2005.

The Los Angeles Galaxy star, who earned his 115th international cap for England in Wednesday night's World Cup qualifier against Belarus, had a successful spell at the Serie A club in the second half of last season.

"The Milan deal is almost done, and hopefully that will be sorted out in the next month and I'll probably be going there at the end of December," the 34-year-old told reporters after being named man of the match for his 30-minute cameo appearance in the 3-0 Wembley victory.

"The move to Milan is close. I've always said I want to go back there and Milan have said they've wanted me from the time I left there.

"They are still saying the same now. It is 95 percent done and dusted, so I don't see why it is not going to happen now."

Beckham has been told by England coach Fabio Capello that he must be playing in a competitive European league is he is going to have a chance of playing at his fourth World Cup finals.

"Am I on target for a World Cup spot? There is a long time to go, a lot of games to play, a lot of the season left," the midfielder said. "We will see. I'll carry on working hard, playing as hard as I can, and just to give myself a chance.

"If I'm in the squad, then great, and if not, then we've got a strong squad of players that can go to Africa and make it interesting. We all have to prove ourselves every game and every training session that we want to be in the squad and in the team for every game, and not just the World Cup," Beckham added.

England had already qualified for South Africa before the final two qualifiers, and Beckham was an unused substitute in Saturday's 1-0 defeat in the Ukraine.

He was brought on against Belarus with England 1-0 ahead and immediately brought cohesion to an experimental lineup as his first touch -- an unexpected short corner -- gave Shaun Wright-Phillips room to fire in the second goal.

Beckham also hit the post late in the match as he was denied his first goal at England's national stadium, after striker Peter Crouch had wrapped up the win with his second of the match and 18th in 35 matches.

Beckham's move to Milan in January was unpopular with the Galaxy's fans and his teammates, but he seems to have won them over in recent weeks after helping the club reach the Major League Soccer playoffs for the first time since 2005.

On Sunday, LA travel to Houston to take on the Dynamos, who are tied with the Galaxy on 44 points at the top of the Western Conference along with Chivas USA, with two matches of the regular season still to play.