(CNN) -- Costa Rica suffered World Cup heartbreak as the United States salvaged a last-gasp 2-2 draw in Washington to deny the visitors an automatic place at next year's finals. 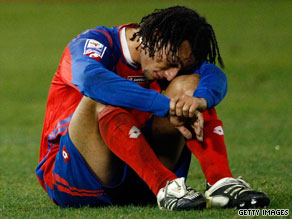 Costa Rica's Michael Barrantes was left dejected after the U.S. snatched a late equalizer in Washington.

Jonathan Bornstein scored in the fifth minute of stoppage time on Wednesday night to leave Los Ticos needing to beat Uruguay, the fifth-placed team from the South American group, in order to qualify for South Africa.

Honduras clinched the third automatic place from the CONCACAF zone on goal difference from Costa Rica after ending their campaign with a 1-0 victory over El Salvador in San Salvador.

The U.S. finished top of the six-team group as second-placed Mexico were also held to a 2-2 draw in their final match against bottom side Trinidad and Tobago, with the top two teams having already qualified last weekend.
Football is on the rise in the U.S.

Costa Rica had seemed set for a place in the finals after taking a 2-0 lead after only 24 minutes in the American capital, with both goals from Bryan Ruiz.

The striker, who plays for Dutch club FC Twente, beat U.S. defender Steve Cherundolo and fired past goalkeeper Tim Howard for the opener in the 21st minute, and then curled in a superb left-foot effort soon after for the second goal.

Michael Bradley pulled one back for the hosts in the 72nd minute after captain Landon Donovan's shot was blocked by goalkeeper Keilor Navas, but the U.S. suffered a big blow when defender Oguchi Onyewu was stretchered off with a knee injury nine minutes later.

The AC Milan player is expected to be sidelined for three or four months after suffering a torn left patella tendon, the setback coming a day after U.S. forward Charlie Davies was severely injured in a car crash which may rule him out of the finals starting in June.

The U.S. had already used all their substitutes when Onyewu went off, so had to finish the match with 10 men.

Costa Rica coach Rene Simoes was sent off in time added on before Bornstein headed in a cross from Robbie Rogers to mean the visitors have yet to win a qualifier on U.S. soil in 24 years.

"We put a lot of numbers in the box," Bornstein told FIFA's official Web site. "I don't usually go up for that, but it was last-shot time. No-one marked me. I just snuck in there and the ball landed on my head."

Honduras qualified for only their second finals, 27 years after their debut appearance in Spain, thanks to a 63rd-minute winner from the Central American nation's all-time leading scorer Carlos Pavon.

The 36-year-old striker rose highest at the far post to head his 55th goal in 92 internationals and banish bitter memories of the weekend, when he missed a penalty and another late chance from close range as Honduras lost 3-2 to the U.S. at home.