Ghana U-20 champions after dramatic shoot-out

(CNN) -- Ten-man Ghana overcame Brazil 4-3 on penalties in the Under-20 World Cup final in Cairo to become the first African side to win the tournament. 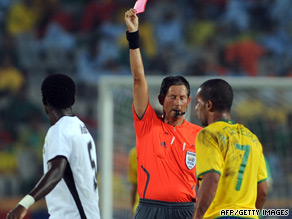 Daniel Addo (left) is sent off but Ghana still became the first African side to win the U-20 World Cup.

Emmanuel Agyemang-Badu scored the winning penalty after Brazil's Maicon had fired over the bar when a successful spot-kick would have handed Brazil the title for a record fifth time.

In a match of few chances, Ghana, who are also African champions, defied the odds to take the trophy out of Europe and South America for the first time ever after Daniel Addo was sent off in the 37th minute for a late tackle on Alex Teixeira.

Goalkeeper Daniel Aygei kept Ghana in the game earlier in extra-time with a point-blank save from Maicon, who had been teed-up 10 yards out by Alex Teixeira's cut-back.

Douglas Costa twice went close in the additional 30 minutes, while Aygei was also called into action to save from Wellington Junior.

Meanwhile, penalties were also needed to separate Hungary and Costa Rica in the third place playoff earlier in the day, but it was the European nation who eventually triumphed after the match ended 1-1 in 90 minutes.

Despite being outplayed for the majority of the game, Costa Rica went ahead with nine minutes remaining when Marcos Urena was allowed to run at the Hungarian defence before cutting inside and firing a right-footed shot which left goalkeeper Peter Gulacsi with no chance.

However, with the match entering injury time, Hungary were awarded a penalty when Jose Mena fouled Krisztian Nemeth in the box.

Vladimir Koman made no mistake from the spot to take the match into a shoot-out.

Liverpool's Gulacsi was the hero of the hour -- keeping out efforts from Cristian Gamboa, Esteban Luna and Adam Simon while Nemeth and Roland Varga both scored to hand Hungary a 2-0 victory on penalties.