Ghana looks to World Cup after U-20 success

By Tony Owusu Amofa
For CNN

ACCRA, Ghana (CNN) -- Ghanaians clad in the national colors of red, gold and green celebrated long into the night on Friday as excitement over the national team's penalty shootout victory over Brazil in the final of the Under-20 World Cup in Egypt brought the West African nation to a standstill. 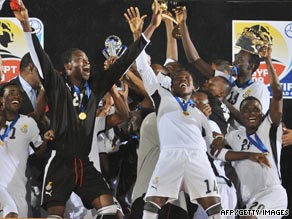 Ghana's victory, 4-3 on penalties after a goalless draw which they had survived since the 37th minute with 10 men, was the first ever by an African side in the tournament. Earlier, many football fans had converged in churches hours before the game to pray for divine intervention.

But the triumph, coupled with Nigeria's disappointing performance in the tournament, may be the clearest signal yet that the balance of power in West Africa may have tilted from Nigeria to Ghana once again.

Nigeria are in danger of missing the World Cup for the second time running. The Super Eagles trail Tunisia by two points in Group B ahead of their last group qualifying matches on November 11 when both countries face tricky away fixtures.

Until 2006, Ghana was regarded as the continent's sleeping giants, having dominated African football in the years after it became the first independent sub-Saharan African country over five decades ago. By contrast, it took Nigeria -- Africa's most populous country -- another three decades to establish itself among the continent's top national sides.

It was not until Ghana's first appearance at the FIFA World Cup in Germany in 2006 that the four-times winners of the African Cup of Nations regained some of their lost glory.

It signaled not only Ghana's long-awaited arrival at football biggest global gathering but also a fulfillment of a prediction in 1990 by Cameroon legend Roger Milla that the world had not seen the best of African football until the Black Stars made it to the World Cup.

As continental champions in 1963, 1965, 1978 and 1982 and with Ghanaian legends including three-times African footballer of the year Abedi Pele and former Eintracht Frankfurt and Leeds United star Anthony Yeboah both rated in their time among the world's best players, Milla knew Ghana had the qualities to match some of the world's best.

Youth success at the FIFA under-17 championship in 1991 and 1995, two appearances in the final of the under-20 championship in 1993 and 2001 and an Olympic bronze medal in Barcelona in 1992 emphasized Ghana's abundance of talent and unfulfilled promise at the highest level.

At Germany 2006, Ghana became the only African survivor after the preliminary round, surprising the bookmakers with victories over the Czech Republic and the U.S. before losing 3-0 to Brazil in a match that was closer than the scoreline suggested.

Ghana's squad for next year's World Cup in South Africa will likely include the cream of the team that impressed in Germany, including Essien and Muntari, as well as some of the brilliant youngsters who sparkled this month World Youth Championship in Egypt; notably Golden Ball and Golden Shoe winner Dominic Adiyiah, Ransford Osei and Andre Ayew, the son of Abedi Pele.

Following the side's masterful display in Egypt and relatively easy World Cup qualifying campaign, the Black Stars will carry both Ghanaian and African expectations on their shoulders as they bid to improve on the quarterfinal places achieved by Cameroon and Senegal in 1990 and 2002 respectively.

With a population of around 140 million and a reputation for producing stars such as Austin Okocha, Nwankwo Kanu and Chelsea's John Obi Mikel, the outstanding qualities of Nigerian football are beyond question.

But African football observers believe poor administration by the Nigerian Football Federation and the resultant instability in the technical direction of the team has undermined the development of Nigerian football and resulted in its dwindling fortunes at the world stage.

Nigeria emerged as West Africa's leading side in 1980 by wining the African Cup of Nations, a feat they repeated 14 years later in Tunisia. The Super Eagles made their World Cup debut in the U.S. in 1994 and qualified for both France 1998 and Japan/South Korea 2002.

As host of this year's FIFA Under-17 championship, Nigeria will be hoping to draw inspiration from Ghana's performance in Egypt to retain the title on home soil next month.

At continental level, the once powerful Super Eagles are anything but super. Since reaching the final of the 2000 African Nations Cup, Nigeria has failed make any meaningful impact despite parading highly-talented squads.

For three successive tournaments Nigeria finished in third place before crashing out at the quarterfinal stage of the 2008 edition in a 2-1 defeat by Ghana.

Kwesi Nyantakyi, the 39-year-old president of the Ghana Football Association (GFA), believes the country is reaping the dividends of a professional approach through the implementation of a five-year business plan, which has attracted massive injection of cash through corporate sponsorship from kit sponsor Puma and mining, banking, brewery and telecommunication firms.

"When we took over in 2005 we realized that one of the biggest problems we faced was the availability of timelines of funds needed to prepare the teams adequately, provide the necessary incentives for the players and numeration for the technical staff," Nyantakyi says.

"The availability of funding timely and an autonomy for the federation has helped us execute our plans effectively and this is showing in our recent impressive performances."

Beyond monetary considerations and administrative stability, Ghana is also reaping the rewards of years of investment in youth football which has produced players like Essien and Muntari -- and now new kid on the block Adiyiah and others.

For now, the country seem to have regained bragging rights as the superpower in West Africa.