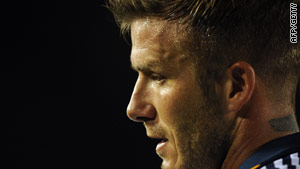 Beckham has been pressing for a return to the San Siro to press his World Cup claims.
STORY HIGHLIGHTS
RELATED TOPICS

(CNN) -- AC Milan confirmed on Monday that England midfielder David Beckham would be returning to them on loan in January.

Negotiations between the Serie A giants and his Major League Soccer club Los Angeles Galaxy had been ongoing for several weeks and have now been successfully concluded.

Beckham played for Milan for six months from January 2009 and his confident displays helped him win back his place in Fabio Capello's England squad.

Capello has warned Beckham that he needs to be playing regular first team football in Europe to have any chance of going to the World Cup finals in South Africa next year and he is clearly relieved that the deal has been sealed.

"I need to give myself the best chance possible to make the World Cup squad and playing for Milan on loan will help me to do that.

"I genuinely enjoyed my time at Milan and I look forward to meeting the players and staff again," he said.

Beckham's first spell with Milan was marked by success on the pitch, scoring two goals in 18 matches, but his delayed return to play for Galaxy in MLS sparked controversy in the United States.

He was criticized by supporters and teammate Landon Donovan, but Galaxy have prospered this season and have reached the MLS playoffs with Beckham playing a key role.

Milan vice-president Adriano Galliani told their official Web site that they were delighted to have secured Beckham's services again.

"We are confident his loan spell will not only improve Milan, it will help the player to take part in the World Cup in South Africa and continue to enhance his career in North America with the LA Galaxy.

"We would like to thank the Galaxy and MLS for their co-operation and understanding."

Milan are reported to have paid a larger loan fee to Galaxy than last season to secure the services of the football icon until the end of the Serie A season and for the Champions League should they qualify for the knockout stages.

It is understood that Beckham will play two friendlies for Galaxy at the end of the MLS season before taking a short holiday with his wife Victoria and his family.

He could make his return to Serie A against Genoa on January 6.

Beckham has a record 115 caps for England as an outfield player and came on as a substitute in the 3-0 World Cup win over Belarus last month.

He would be appearing in his fourth World Cup if he makes the squad for South Africa.