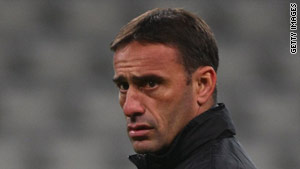 The Portuguese giants are still likely to progress to the knockout stages of the competition, having won all their previous matches, but it will be without Bento.

The former youth team coach had been facing calls for his head following a poor run domestically that has left last season's runners-up seventh in the Portuguese Liga and without a league win since September.

A statement on the club's official Web site read: "On the morning of November 6, 2009, Paulo Bento handed in his resignation as head coach of the Sporting Clube de Portugal first team as he felt he was not meeting the conditions to remain in charge of the team.

"From this date, and until a different decision, the Sporting first team will be guided by the coach Leonel Pontes."

Bento, 40, has been in charge at the Estadio Jose Alvalade since 2005 and has earned the nickname Papa-Tacas (cup-eater) after steering Sporting to two Portuguese cups and two Supercups.