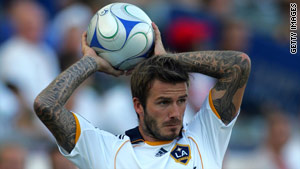 David Beckham's commitments with Los Angeles Galaxy have forced him to withdraw from the England squad to face Brazil in a friendly in Qatar.

LA Galaxy progressed to the Major League Soccer Western Conference final against Houston Dynamo after a 1-0 second-leg win over rivals Chivas at the Home Depot Center which gave them a 3-2 aggregate victory.

The 34-year-old midfielder had been named in Fabio Capello's 24-man squad but would only have joined up with his England teammates in Doha if the Galaxy had been eliminated from the MLS play-offs.

Beckham had played an important role in the win which ensured that Galaxy are now just one game away from the MLS Cup final which decides the league champions.

The former Manchester United and Real Madrid man had sent in a defense-splitting pass to Landon Donovan that led to Mike Magee being fouled inside the penalty area.

Donovan converted the resulting penalty kick and his 73rd-minute strike proved decisive although Beckham was later withdrawn after he struggled from a knock to his lower back.

Beckham had ice strapped to the problem area and watched from the bench as his teammates hung on to their lead against a late Chivas rally.

The victory ensured the best finish for Galaxy since Beckham's arrival in July 2007 although the Englishman has incurred the wrath of the club's fans who have questioned his commitment to the team.

Beckham is set to return to Italian side AC Milan on loan again in January 2010 having spent six months with the Serie A outfit in January 2009.

Elsewhere, Houston had reached the conference final with a 1-0 home win over Seattle Sounders. Brian Ching's stoppage-time winner had been the only game of the two-legged tie and brought to an end a successful inaugural season for the Sounders.

In the Eastern Conference, the Chicago Fire progressed at the expense of the New England England Revolution and will face Real Salt Lake, who knocked out defending MLS champions Columbus Crew on Friday.