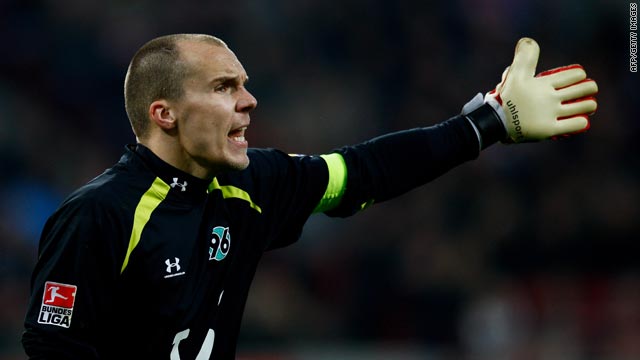 Robert Enke had been expected to be part of Germany's squad for the 2010 World Cup finals.
STORY HIGHLIGHTS
RELATED TOPICS

(CNN) -- Hundred's of fans and former teammates of Robert Enke gathered to lay flowers and light candles outside of Hannover 96's Niedersachsen Stadion after the club's German goalkeeper was struck and killed by a train on Tuesday, in what police called an apparent suicide.

Police did not elaborate on what evidence they had that pointed to suicide, but Enke's close friend and advisor Jorg Neblung told the official Web site of football's world governing body FIFA: "I can confirm that it was suicide. Robert took his own life shortly before six o'clock."

The team's official Web site has been converted into a single-page memorial.

Enke captained Hannover 96, a team who currently lie tenth in Germany's Bundesliga top division, and had been capped by his national side eight times after making his debut aged 29.

The shot-stopper had also appeared for teams including Carl Zeiss Jena, Borussia Monchengladbach, Benfica, Barcelona, Fenerbahce and Tenerife in Spain.

His teammates were stunned by news of his death.

We are in a state of shock. It is beyond words.
--Germany team manager Oliver Bierhoff

"We are in a state of shock," said team manager Oliver Bierhoff in a statement from the German Football Federation. "It is beyond words."

The German Football Federation (DFB) said Enke always said he wanted to play for the national team at the 2010 World Cup.

Soccer commentator and journalist Rafael Honigstein told CNN International that Enke was on course to be picked as the number-one choice for the team.

Enke had missed Germany's last four matches because of a bacterial infection, but had recently returned to action with Hannover.

"The leadership of the German national team never had any doubt that he was important for the team both as a goalkeeper and as a human being," the DFB statement said.

Enke is survived by his wife and eight-month-old daughter, who the couple adopted.

The couple's two-year-old daughter died in 2006 from a heart condition, and Honigstein said the loss of his child had taken a toll on Enke.

"It's been well documented that he had a tough time," Honigstein said. "People knew it was a terrible, terrible tragedy for him."

"I don't know why and how this happened," said Martin Kind, the chairman of Hannover 96. "It is a total catastrophe. I am finding it hard to understand. All I can say for sure is that it had nothing to do with football."

Fellow players said they believed that Enke had been suffering depression. "He was unstable," said Mr Kind. "But he kept it under wraps."

The coach of Germany's national team, Joachim Lowe, had been preparing his squad for their friendly game against Chile this weekend. The DFB have not yet confirmed whether the game would still be played.

A press conference is due to be held by the DFB at 1130 GMT, while Hannover 96 will speak to the media at 1200 GMT on Wednesday.