Germany reacts to death of Enke 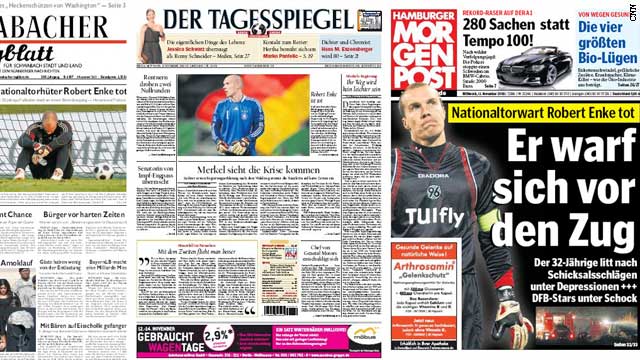 (CNN) -- The death of Hannover 96 and Germany goalkeeper Robert Enke from an apparent suicide has stunned the football world.

The German media reaction to the death of a man many tipped to represent the country at the 2010 World Cup, has been one of shock.

Despite his absence from the German squad for the upcoming friendlies, they wrote manager Joachim Löw had "clearly signaled that he would continue to be favourite for the number one spot in the 2010 World Cup in South Africa."

"He threw himself before the train" was the headline in the Hamburger Morgenpost, the newspaper going onto recall the death of his two-year-old daughter Lara in 2006.

They added that he and his wife had adopted a two-month-old girl earlier this year and Enke had been "shining with happiness, confidence written on his face."

Der Bild said it had been revealed "Enke wrote a departure letter."

"Goalkeeper Robert Enke is dead. On November 10 at 18.17 the 32-year-old threw himself under a train.

"Now the police have confiemd: Enke wrote a farewell letter. Thus there is no doubt a sucicide of the player."

He was a young kid with a huge desire to reach his goals and learn, a man with a capital M
--Nuno Gomes, former Benfica team-mate of Enke.

The Munich paper also wrote of the shock of the "colleagues and fans who appreciated him very much.

"But Robert Enke had many setbacks in his career to cope with of a private and professional nature."

The football world has also been quick to express their condolences too.

Barcelona, who Enke played for between 2002 and 2004 wrote on their official Web site:

"The club deeply regrets his death and would like to pass on their sympathies to his current club and his family."

Enke enjoyed a more successful spell at Benfica, making his reputation before the Barca move.

Chairman Luís Filipe Vieira said: "Nobody is ever prepared to face the loss of someone with whom they have lived together and enjoyed good memories.

"When a tragedy reaches someone with the age of Robert Enke the frustration is still bigger."

Enke's former team-mate Nuno Gomes added: "I remember how he was just a young kid when he came here but, from day one, he made a great effort to learn our language and did it very quickly.

"He was a young kid with a huge desire to reach his goals and learn, a man with a capital M."