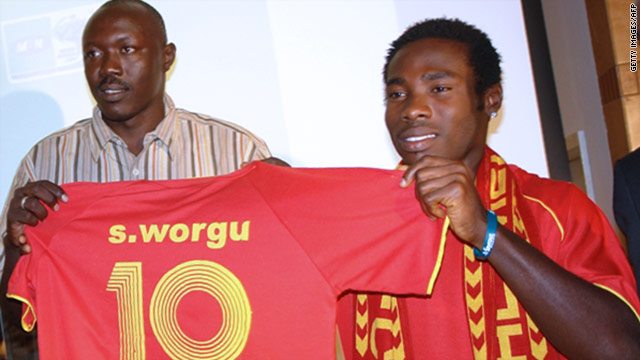 (CNN) -- Nigerian footballer Stephen Worgu has been sentenced to 40 lashes after he was convicted of drinking alcohol in Sudan where he plays for first division side Al-Merreikh of Omdurman.

The 20-year-old forward, who joined the northern Sudan outfit in October 2008, was found guilty of drinking alcohol and driving under the influence by an east Khartoum court.

Alcohol is illegal in the Muslim north of Sudan according to Article 78 of the penal code, although it is not in the semi-autonomous and largely non-Muslim south.

The court ordered Worgu to pay a fine of $20 for the alcohol consumption, $80 for driving under the influence as well as receiving 40 lashes for the incident which is said to have taken place in the capital Khartoum on August 21.

The forward's lawyer has appealed against the punishment for the player who had previously admitted in interviews that he had struggled to adapt to the different culture and religious life in Sudan.

Worgu, who has been a regular for the Nigerian Under-20 side, had moved to Al-Merreikh for $2.6 million from Enyimba in Nigeria ahead of Egyptian side Al-Ahly in what was one of the biggest transfers in African football.

He had previously been the top scorer in the African Champions League in 2008 after he found the net 13 times but has largely struggled to recapture that form at Al-Merreikh.