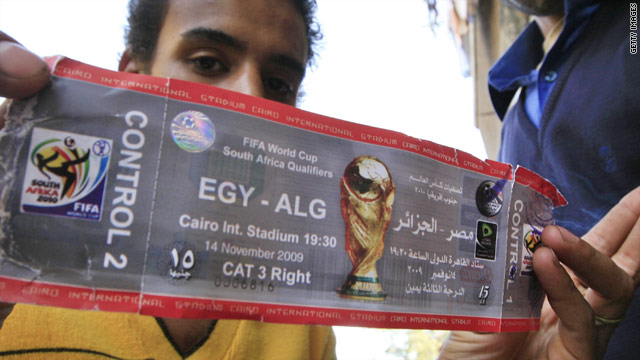 (CNN) -- Football's world governing body FIFA has called for greater security to be provided after three players from Algeria's national football team were injured when Egyptian fans threw stones at the team bus as it arrived in Cairo on Thursday.

The north African arch-rivals meet on Saturday in a crucial World Cup qualifying game in the Egyptian capital, as the group-leading Desert Foxes aim to qualify for the tournament for the first time since since 1986 at the expense of the reigning African champions.

FIFA delegate, Walter Gagg, witnessed the incident and told reporters: "We saw that three players had been injured -- Khaled Lemmouchia on the head, Rafik Halliche above the eye and Rafik Saifi on the arm.

"These weren't superficial injuries. With the stitches needed, we will have to see if these players can play. The team doctor has still to make a decision on that."

Gagg confirmed Algeria's goalkeeping coach had been concussed after the windows of the coach were smashed by stones thrown by fans.

These weren't superficial injuries. With the stitches needed, we will have to see if these players can play
--FIFA delegate, Walter Gagg

FIFA announced their concerns following the incident in a statement on their official Web site which read: "FIFA's Organizing Committee for the FIFA World Cup have asked the Egyptian Football Association and the highest national authorities ... to confirm the implementation of the necessary additional safety and security measures at any time for the Algerian delegation.

"Last week, FIFA had officially written to the Football Associations of Algeria and Egypt to express its firm wish that the preliminary competition for the 2010 FIFA World Cup South Africa ends as it began, in the spirit of fair play with the necessary cooperation of all the parties."

The two north African neighbors have a history of intense competition -- the two sides locked horns in 1989 in a final qualifier for the World Cup hosted by Italy, a match that was followed by riots.

Egypt, despite winning the last two Africa Cup of Nations, are on the brink of failing to qualify for the World Cup that will be held on African soil for the first time in 2010.

The Pharaohs need to win by three-goals to book their place in South Africa, a two-nil win will leave the teams equal on goal difference forcing another play-off to take place on neutral ground.