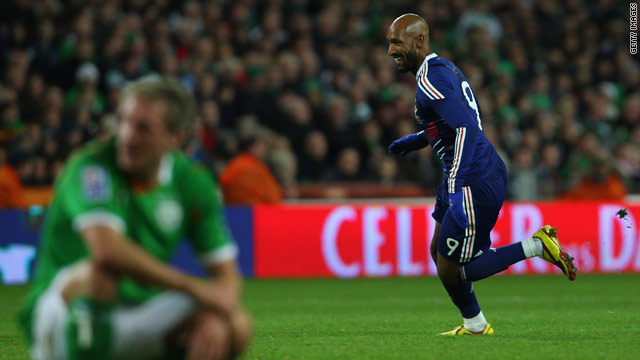 (CNN) -- France took a giant stride towards the World Cup finals with a 1-0 win over the Republic of Ireland in their European playoff match in Dublin on Saturday night.

Chelsea's Nicolas Anelka made the decisive strike in the 72nd minute to leave the Irish with an uphill task in the second leg in the Stade de France on Wednesday.

The result was identical to when the sides met in the same situation four years ago with the extra class of the French proving decisive in the second half.

Anelka took his chance to send home a shot which took a cruel deflection off Sean St. Leger to leave Shay Given with no chance.

Ireland showed early promise as captain Robbie Keane saw a shot blocked, Liam Lawrence had a shot deflected past the post from a clear opening and Keith Andrews shot wide.

But in the second half France looked more dangerous and after Anelka had put them ahead Andre-Pierre Gignac should have made it two as he shot wide with the goal gaping.

French striker Thierry Henry was refusing to write off their Irish opponents ahead of the second leg.

"There are still 90 minutes to go so it will be a tough game for us in Paris," he told Sky Sports.

"We wanted to play in the first half but you have to give the Irish team credit, they didn't give us any room to play our game."

Fellow European powerhouses Portugal also have a slender advantage after a 1-0 win over Bosnia-Herzegovina in Lisbon.

Bruno Alves scored the only goal of the match with a 34th minute header for a home side lacking injured talisman Cristiano Ronaldo.

But the visitors were unlucky not to equalize, hitting the woodwork twice in quick succession as the pressed for the leveler with Edin Dzeko and Zlatan Muslimovic the unlucky players.

Earlier, Diniyar Bilyaletdinov scored twice as Russia claimed a narrow advantage following a 2-1 victory over Slovenia in the first leg of their World Cup playoff match in Moscow.

The Everton midfielder opened the scoring when he smashed a powerful shot into the top-right corner of the net and then grabbed a second when he coolly finished from close range.

Russia hardly largely dominated the match in front of the watching Vladimir Putin but Slovenia scored could turn out of be a crucial away goal two minutes from time.

Marko Suler's shot was brilliantly saved by Russian goalkeeper Igor Akinfeev but substitute Nejc Pencnik was able to head the ball into an empty net.

Ukraine will be favorites to go through after drawing 0-0 against Greece in the Olympic Stadium in Athens.