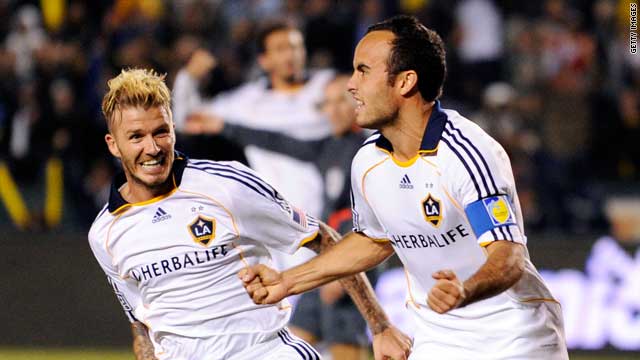 (CNN) -- David Beckham believes the furore that followed his return to the LA Galaxy from his loan spell with AC Milan earlier this year has galvanized the team.

The Galaxy won the MLS Western Conference Championship with a 2-0 win at home to Houston Dynamo on Friday night, Beckham setting up Gregg Berhalter's 102nd-minute opener.

They will face Real Salt Lake, who upset the favored Chicago Fire 5-4 in a penalty shootout to win the Eastern Conference title on Saturday to reach the MLS Cup final in Seattle next Sunday.

Beckham had been subjected to abuse by his own fans after missing the start of the MLS season when he was in Italy, while Galaxy captain Landon Donovan questioned his commitment to the LA franchise.

However, the England midfielder -- who missed Saturday's 1-0 friendly defeat by Brazil in Qatar to play for his club -- thinks the situation helped bring the team together.

"There's nothing wrong with a bit of controversy in a club, it brings players and teams together and it's done that," Beckham told ESPN in a post-match interview.

"I don't have to say anything about myself, I leave that down to other people to decide.

"I love playing soccer. I work hard for my teammates, myself, my manager, the fans and I hope that's enough for people."

There's nothing wrong with a bit of controversy in a club, it brings players and teams together
--David Beckham

Beckham joined the Galaxy from Real Madrid in 2007 but they struggled to make an impact during the Englishman's time with the team until the arrival of former USA national team coach Bruce Arena.

Beckham, who returns to Milan in January as he bids to win a place in England's World Cup squad, believes this season's achievements have already gone some way for making up for the previous two seasons.

"We want to win next week but reaching it is the biggest thing," he told the UK Press Association.

"We've done that, done the hard work and this team deserves it."