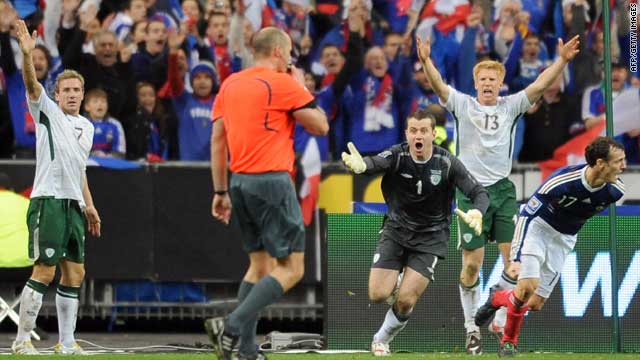 London, England (CNN) -- The governing body of world football, FIFA, has turned down the request from the Irish Football Association (FAI) to replay their deciding World Cup play-off game against France.

The controversial match, that was played on Wednesday, has caused a diplomatic storm after French forward Thierry Henry admitted to illegally using his hand to set-up the goal that gave his team a 2-1 aggregate victory to seal qualification to the tournament.

But despite a letter sent to FIFA by the FAI, and calls from both the Irish prime minister Brian Cowen and Irish justice minister Dermot Ahern for the game to be replayed, the sport's organizing body has refused the request.

Irish football officials lodged an official complaint with FIFA on Thursday and sent a letter to the French Football Federation (FFF) in a bid to get the game reconvened. The world's worst football injustices

"The governing body of world football have to step up to the plate and accede to our call for a replay," FAI chief executive John Delaney told reporters.

The FAI pointed to a precedent set in 2005 when a World Cup qualifier between Uzbekistan and Bahrain was replayed after the referee was found to have committed a technical error in the application of the laws of the game.

But a FIFA spokesman said the precedent did not apply because the referee in the match "saw the incident in question and simply failed to apply the proper rules".

Irish prime minister Cowen raised the issue with French president Nicolas Sarkozy at a European Union (EU) summit in Brussels, where the two leaders were meeting to vote for the next president of Europe.

Cowen told the Irish Independent newspaper: "I didn't ask for a replay. I said, you know: 'What do you think?' and he said: 'Look, I understand totally the sense of disappointment that you feel about the game. I'm not trying to mix politics and sport in this respect. We just had a chat. [But] it's not going to be resolved by he and I."

Mr Sarkozy, however, said he did not want to get involved: "I said to Brian Cowen, who is a friend of mine as you know, that I was sorry for them and how I was struck by the talent and vigor of the Irish team.

"Now do not ask me to stand in for the referee of the game or the football decision -- be they in France or in Europe," he said.

"What will be done will be done. But leave me out of it, please. And to be perfectly frank with you that is the sort of answer I want to give," he added.

"I think it's very sad. I'm of course very happy that the French team will play in the World Cup, but I find it very sad that it did qualify with... you know... an act of cheating," she told RTL radio station.

The game between France and Ireland was one of six play offs played on Wednesday which decided the final 32 teams heading South Africa in 2010.

Video replays showed Henry used his hand to stop the ball going out of play in extra-time, before he passed to William Gallas who booked his nation's place with a headed goal.

The draw for next year's finals is due to be made in Cape Town on December 4.