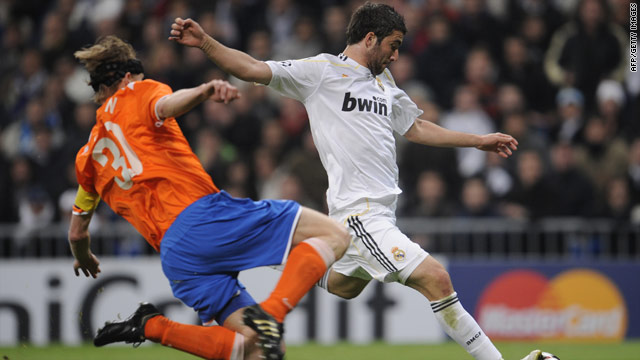 (CNN) -- Real Madrid took a step closer to the last 16 of the Champions League after easing past Zurich 1-0 thanks to a first-half goal from Gonzalo Higuain.

Madrid bossed their Swiss opponents in terms of possession and territory, but were unable to turn that dominance into a more comfortable victory.

However, the win still lifted Madrid to the top of Group C and they are now two points clear of AC Milan and three clear of Marseille, who Manuel Pellegrini's side play in their final match.

Last season's top scorer Higuain, who has netted five goals in Madrid's last four league matches, scored the only goal in the 11th minute when he picked up Kaka's through-ball before slotting home a low shot.

The other good news for the Spanish giants was the return of $130m striker Cristiano Ronaldo, who has missed Madrid's last 10 matches after suffering an ankle injury in the previous clash with Marseille on September 30.

The Portuguese international appeared as a second-half substitute and looks to be fit enough to feature in the weekend's 'El Classico' showdown against Barcelona.

In the other match, AC Milan were held to a 1-1 draw by Marseille at the San Siro and their qualification hopes are still up in the air.

Milan dominated possession in the second half but failed to make the most of their chances and were fortunate to escape with a draw after Marseille were twice denied by the post.

The outcome leaves Milan second, one point clear of their opponents and two behind Real Madrid, and they will need to beat Zurich in Switzerland in their final match to secure a last 16 place.

The home side went ahead when Alexandre Pato fed Borriello, who surged inside the area, got past defender Gabriel Heinze and fired from close-range past Marseille goalkeeper Steve Mandanda.

But the visitors reacted well and soon levelled. Milan goalkeeper Dida managed to clear Mamadou Niang's cross inside the area but only as far as Gonzalez, who made no mistake as he returned the loose ball into the net.

Meanwhile, French champions Bordeaux secured top spot in Group A as they beat Juventus 2-0, a result which leaves the Italians in danger of crashing out of the competition.

Fernando headed Bordeaux into a 54th-minute lead and Marouane Chamakh made certain with a close-range stoppage-time second as the hosts extended their unbeaten run, with their only dropped points coming in the 1-1 draw at Juventus in September.

Diego fluffed a number of chances for Juve, who could yet be knocked out of the competition if they lose to Bayern Munich in a winner-takes-all showdown in Turin on December 8.

Bayern are one point behind the Serie A side and a win at Juventus would see them progress, with the losers dropping into the Europa League.

Ivica Olic scored the only goal of the game in the 62nd minute, stroking the ball into the empty net after keeper Nir Davidovic parried Mario Gomez's 20-yard strike into his path.