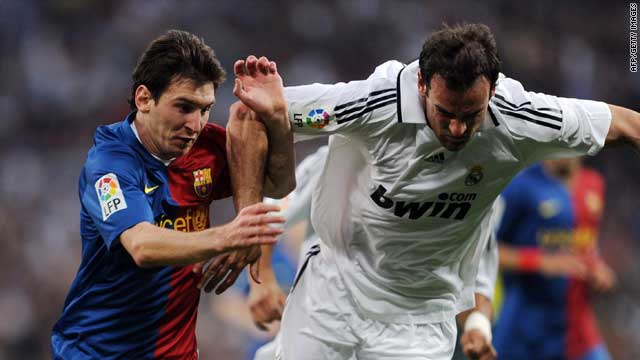 Real currently top Spain's Primera Liga with Barca a point behind, though both clubs having struggled to maintain any consistency so far this season.

As if any sparks were needed to ignite an already fiery affair, the meeting could see Real's newest 'Galacticos' Kaka, Karim Benzema and Cristiano Ronaldo make their 'El Clasico' debut in the capital club's first meeting with Barcelona since the latter claimed their historic treble.

The history of the rivalry dates back over 100 years and is one of football's most unique in that it stretches beyond the boundaries of just one city.

If not inner-city animosity then what is it that generates such hostility? Check out our list of 10 things you might now know about "El Clasico", one of sport's most anticipated encounters.

1. The first meeting and inter-club transfer

Known at the time as Madrid Football Club, their first clash with Barcelona came on May 13, 1902 in the semifinals of the Spanish championship with the latter winning 3-1. In the same month Alfonso Albeniz Jordana became the first player to move between clubs when he left Barcelona for Madrid.

An epic Spanish Cup semifinal in 1916 saw the meeting last four matches in attempt to find a winner. Madrid would eventually win 4-2 in controversial fashion when Barcelona players, protesting what they viewed as an offside fourth goal, walking off the pitch. The final between Madrid and Athletic Bilbao was hosted by Espanyol of Barcelona and saw Madrid needing protection from the Civil Guard on their way to and from the match as they were pelted with rocks.

In 1920 Madrid were granted the prefix Real, royal in Spanish, by a subordinate of King Alfonso XIII. It was the first sign of favor to be shown to the capital side by those in power but would not be the last. In contrast Barcelona began to take pride in their role as representatives of the Catalan population of north eastern Spain.

Real led the first few weeks of the inaugural La Liga in 1928/29 and having lost their lead regained it with only one fixture left. A final game defeat to Bilbao cost them the title, with Barcelona finishing top of the table.

In June 1936 the two teams met in their first cup final, Real grabbing a 2-1 win at Valencia's Mestalla stadium, a month later the Spanish civil war began. Identifying sides in a conflict that pitted families against each other is complicated, but what is clear is Barca president Josep Sunol was shot and killed by General Franco's soldiers a month into the war. The same Franco who during his dictatorship made clear he was a Real Madrid fan.

As a symbol of Catalan nationalism, Barcelona faced problems under the Franco regime but also acted as something of a safe-haven for its fans from oppression. Amongst the huge Nou Camp crowds people could safely speak Catalan -- a banned dialect under Franco -- without fear of reprisal from police.

Both Barcelona and Real Madrid fought for the signature of one of the greatest players of all time, Argentine Alfredo Di Stefano. In a complicated and controversial saga, with both sides claiming to have signed him. Di Stefano went on to help Real win five European Cups and dominate domestically, a fact that only raised the animosity between the two clubs.

Luis Figo had been a Catalan hero for five years at Barcelona before in 2000 he joined Real in a big money transfer to join the Madrid's side growing collection of 'Galacticos'. His reception upon eventually returning to the Nou Camp was to say the least, hostile. Everytime he went to take crosses and throw-ins he was pelted with objects by angry Barca fans, the most notorious being a pig's head that was thrown onto the pitch.

During celebrations for Barcelona's 2004/05 La Liga title win Samuel Eto'o, formerly of Real Madrid, gleefully taunted his old side and its fans. While the Cameroon striker later apologised for his harsh language there was no mistaking the sentiment. Well into the 21st century, the rivalry continues.

While Barcelona are the current champions, European Champions and Copa Del Rey, Real Madrid have the edge in overall wins in these competions in everything but the latter. Real have won 31 La Liga titles compared to Barcelona's 19 and also have won nine Champions Leagues to Barca's three. The Catalan giants do have more Copa Del Rey successes with 25 wins compared to 17, also having won ten other European titles over Real's three. Head to head in the 'El Clasico' it is Los Blancos who hold bragging rights, having won the game 68 times to Barca's 60.