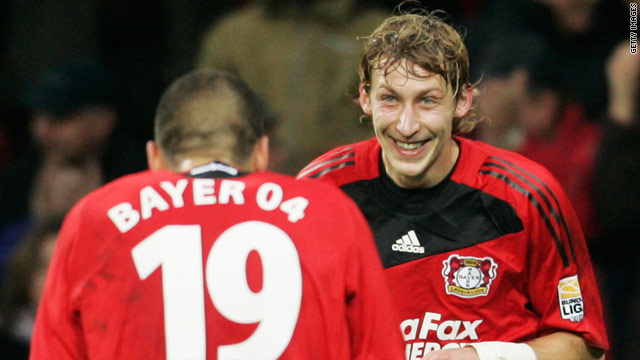 (CNN) -- Stefan Kiessling grabbed a hat-trick as Bayer Leverkusen reclaimed top spot in the Bundesliga with a 4-0 home victory over Stuttgart on Sunday.

The convincing win lifted them three points clear of Werder Bremen, who had taken over at the summit on goal difference with a 2-2 draw with defending champions VfL Wolfsburg on Saturday.

But undefeated Leverkusen made no mistake with the Bundesliga top scorer Kiessling leading the way for Jupp Heynckes' men after 22 minutes.

Tony Kroos' free-kick found Sami Hyypia, who headed into the path of Kiessling and he volleyed home from close range.

Kroos hit the post in the 32nd minute then made the second goal seven minutes later with a diagonal pass to Eren Derdiyok, who headed past Jens Lehmann from eight meters.

Stuttgart, under Markus Babbel, won in the Champions League at Rangers in midweek, but are without a Bundesliga win in sixth games, and showed few signs they could mount a second half recovery.

Roberto Hilbert shot into the side-netting for the visitors, but Kiessling put the game out of reach on the hour mark, fastening onto another assist from the excellent Kroos to score the third.

He sealed his hat-trick in the 87th minute from the penalty spot after Lehmann had pulled down Derdiyok.

Later on Sunday, Bayern Munich eased a little of the pressure on coach Louis van Gaal with a 3-0 win over Hannover to move to fourth in the Bundesliga.

Thomas Muller put Bayern ahead in the 19th minute and Croatian Ivica Olic added the second two minutes after the break.

A Mario Gomez strike in the 90th minute sealed the victory after van Gaal had been reportedly told by the club's director of sport Christian Nerlinger that he must win the final four games of 2009 to keep hold of his job.