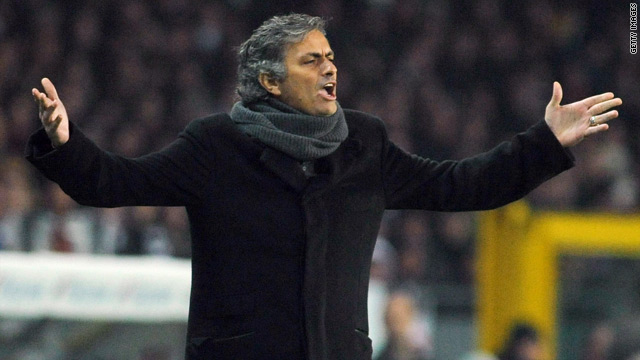 Jose Mourinho was sent to the stands after his sarcstic gestures at referee Massimiliano Saccani.
STORY HIGHLIGHTS
RELATED TOPICS

(CNN) -- Manager Jose Mourinho was sent off as Italian leaders Inter Milan crashed to a 2-1 defeat at title hopefuls Juventus on Saturday night.

Second-placed AC Milan are now four points adrift of their city rivals after a 3-0 home crushing of Sampdoria, who remained in fifth.

Brazil midfielder Felipe Melo was credited with the 20th-minute opening goal in Turin as he deflected in a free-kick from compatriot Diego, and Mourinho was ordered from the dugout following his protestations about the foul being awarded in the first place.

Melo was sent off with three minutes left for his second yellow card after aiming an elbow at Mario Balotelli, who was also booked for his theatrical reaction.

The defeat was a blow to Inter's confidence ahead of Wednesday's Champions League showdown with Russia's Rubin Kazan at the San Siro, with the winner earning a place in the knockout stages.

AC Milan scored all three goals in the first half as striker Marco Borriello, who used to play for Sampdoria's city rivals Genoa, headed the opener in the first minute from Ronaldinho's cross.

The Brazilian was in fine form, and also set up the second goal for Clarence Seedorf in the 21st minute as he threaded a neat pass to the veteran Dutch midfielder.

Ronaldinho's compatriot Alexandre Pato made it 3-0 just two minutes later with his seventh goal of the season, netting at the second attempt after goalkeeper Luca Castellazzi blocked his initial effort following a header on by Borriello.

It was Milan's fifth successive victory, with coach Leonardo taking Ronaldinho off at halftime as a precaution due to a slight knee problem ahead of Tuesday's Champions League trip to FC Zurich, which will determine whether the Rossoneri qualify for the knockout stages.

Sampdoria slumped to a third defeat in a week, having been knocked out of the Italian Cup by lowly Livorno in midweek following the embarrassing 3-0 derby defeat to Genoa last weekend.