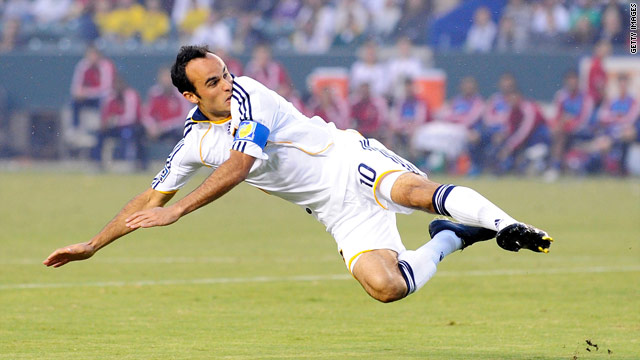 Landon Donovan has made his name as an all-action star for the U.S. and his club Los Angeles Galaxy.
STORY HIGHLIGHTS

(CNN) -- United States captain Landon Donovan is poised for a January switch to Everton after the English Premier League club confirmed talks were underway about a loan move.

The 27-year-old, who has won a record 120 international caps, will lead his country against England in their opening group game at the World Cup finals in South Africa next year.

The versatile Los Angeles Galaxy forward is expected to join compatriot Tim Howard on Merseyside from January 2 if negotiations are successful, and remain at Goodison Park until mid-March.

"Landon is a player who [manager] David Moyes has identified as someone he would like to bring to the club," chief executive Robert Elstone told Everton's official Web site.

"We are working to make that happen and hope we can reach agreement soon with all the appropriate parties."

Donovan has previous experience in Europe, having gone to Bayer Leverkusen while a teenager. But he failed to make an impact at the German club and was loaned to U.S. Major League Soccer outfit San Jose Earthquakes before joining the Galaxy in 2005.

He spent a spell on loan at Bayern Munich at the start of this year, making six appearances, and then after a public falling-out with teammate David Beckham helped the galaxy reach the final of the MLS Cup.

Everton are struggling in the bottom half of the Premier League following a debilitating series of injuries to key players, but have qualified for the knockout stages of the Europa League.