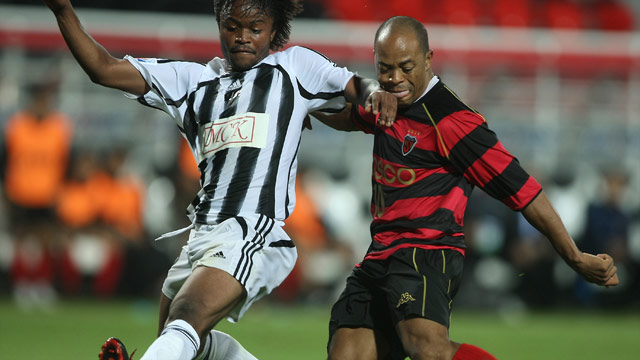 No Byung-Jun went close for Pohang early in the first half of the quarterfinal clash on Friday but his free-kick destined for the top corner was tipped past the post by Mazembe goalkeeper Muteba Kidiaba.

It was, though, the African champions who took the lead in Abu Dhabi in the 28th minute through Mbenza Bedi.

The lively Mabi Mputu created a shooting opportunity for Bedi and he lashed a fierce long-range drive from outside the penalty area which beat Pohang goalkeeper Shin Hwa-Yong and flew into the top-left corner.

Pohang almost hit back instantly when Denilson threaded a clever through-ball into the path of Namkung Do but he could only direct a weak shot straight at Kidiaba.

Didier Garzitto's side remained under pressure as Denilson and Kim Jae-Sung both squandered good opportunities to level before the half-time interval.

The Asian champions continued to apply the pressure after the break and No went close again in the 49th minute but was denied by Kidiaba.

We were unduly nervous at the start, we failed to take our best chances, and we lost concentration.
--Pohang coach Sergio Farias

But No made amends a minute later when his cross picked out Brazilian striker Denilson who was able to direct a close-range header past Kidiaba before he completed a bizarre celebration.

Mazembe came close to restoring their advantage moments after falling behind but Mulota Kabangu could only shoot wide when well placed inside the box.

Denilson proved to more clinical in front of goal in the 78th minute and he sidefooted the ball home from inside the penalty area and despite some late Mazembe pressure the Steelers side never looked like losing the advantage.

Pohang coach Sergio Farias admitted his side had performed well to overcome an uncertain start which had handed the initiative to Mazembe.

"We were unduly nervous at the start, we failed to take our best chances, and we lost concentration," Farias told reporters in the post-match press conference.

"Their goal took us by surprise, and we were unable to impose ourselves on the game the way we wanted to after that. We corrected this mistake at half-time, and duly equalized as a result.

"We turned up the pressure again by bringing on another striker, and we went on to score the winning goal."

The Steelers now face South American champions Estudiantes of Argentina in the semifinals on Tuesday while Mazembe will take on Auckland City or Atlante in the fifth-place play-off.