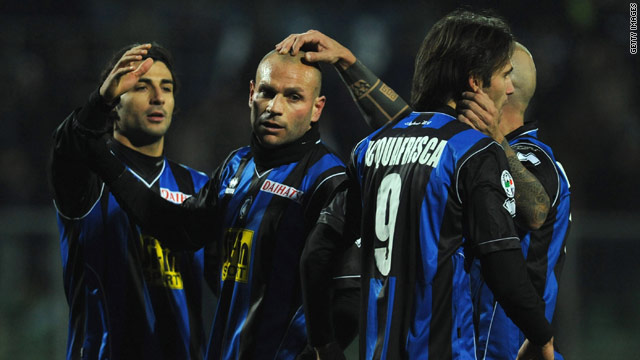 (CNN) -- Inter Milan were held to a disappointing 1-1 draw at Atalanta on Sunday but increased their lead at the top of Serie A after AC Milan were shocked 2-0 in the San Siro by Palermo.

Four-time defending champions Inter took a 15th minute lead through top scorer Diego Milito, as the Argentine star eluded the attentions of several defenders to net his 10th of the season.

But Jose Mourinho's men were down to 10-men just after the hour as midfielder Wesley Sneijder went for two bookable offences and Atalanta capitalized with an equalizer by substitute Simone Tiribocchi on 81 minutes.

Arch-rivals Milan have been closing the gap at the top with five straight wins but came unstuck at home to Palermo as Fabrizio Miccoli showed his brilliance after the break.

He cut in from the left to beat Dida in the 49th minute and then set up up the second with more fine play as Mark Bresciano fired home just after the hour.

Milan coach Leonardo said his team had not deserved to win the match.

"I have to congratulate Palermo," he told reporters.

"They deserved the win.

"They play a little bit like us, with so many players in attack. "It was an open game but the two goals conceded after the re-start determined the result."

Inter lead the table with 36 points from 16 games with Milan five points adrift in second place and Juventus a further point back after a shock 3-1 loss at Bari on Saturday.

The surgery lasted 10 minutes and it was successful.
--Juventus statement about Gianluigi Buffon

Juve went into the game off the back of a 2-1 win over Inter the week before but suffered further bad news on Sunday as it was announced goalkeeper Gianluigi Buffon has undergone arthroscopic surgery to repair a torn lateral meniscus in his left knee.

Buffon, widely regarded as the best goalkeeper in the world, played in the defeat at Bari, but has been battling knee trouble for some time.

A statement on the club Web site read: "The surgery lasted 10 minutes and it was successful.

"Buffon will leave the clinic and return home today." No details were released but the 31-year-old is set to be out of action for at least six weeks.

In other Serie A action on Sunday, Fiorentina continued their poor recent run in the league with a 2-1 defeat at Chievo, while Parma kept pace in touch in the battle for Champions League places by winning 2-1 at home to Bologna.

But struggling Lazio partially appeased their protesting fans with a 1-0 home win over Genoa while in Sunday's late kick off, AS Roma held Sampdoria to a goalless home draw.