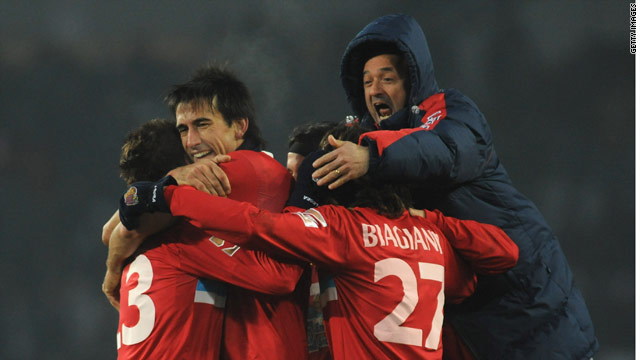 Catania's players celebrate their much-needed victory at Juventus in Serie A.
STORY HIGHLIGHTS

(CNN) -- Juventus plumbed new depths with a 2-1 home defeat to lowly Catania for a third straight Serie A defeat to derail their Italian title challenge.

Juve had been challenging four-time champions Inter before a sorry run of form which has also seen Ciro Ferrara's men make a shock exit from the Champions League.

Inter's later 1-0 win over Lazio with Samuel Eto'o scoring in the 14th minute leaves them eight points clear of AC Milan, whose game with Fiorentina was postponed on Saturday due to heavy snow.

Juventus, who are nine points adrift, fell behind to a Jorge Martinez penalty in the first half.

Hasan Salihamidzic equalized for Juventus just after the hour mark, but Mariano Izco scored the winner three minutes from time for Catania's second victory of the season, although they remain in the drop zone.

To complete a miserable afternoon for Juventus, reports in Italy said they faced disciplinary action after racist chants from the 'Ultra' section of their fans Turin's Stadio Olimpico.

In other action, Nicolas Burdisso and Matteo Brighi scored second-half goals to give AS Roma a 2-0 win at home to Parma to move into the fourth and final Champions League berth.

In the German Bundesliga, SV Hamburg beat Werder Bremen 2-1 at home to stay in contention for the title going into the winter break.

Joris Mathijsen scored a ninth minute header and Marcell Jansen made it 2-0 in the 36th for Hamburg, but they had Jerome Boateng sent off for a foul on Marko Marin before halftime.

Naldo scored a late consolation for Bremen in stoppage time.

Hamburg are in fourth in the Bundesiga, four points adrift of leaders Bayer Leverkusen after 17 rounds,

In the other Sunday game, Cologne beat Nuremberg 3-0 in a relegation battle.

The top match in the Spanish La Liga on Sunday pitched Valencia against Deportivo La Coruna.

A win would have lifted visitors Valencia into third place over Sevilla, but it proved scoreless. Deportivo stay seventh. In Saturday's action, Real Madrid thrashed Zaragoza 6-0 to close to within two points of leaders Barcelona, who were winning the Club World Cup in the UAE.