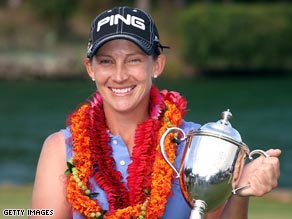 Stanford celebrates her third victory in her last seven tournaments at Turtle Bay.

Stanford carded three late birdies to beat Wie by three strokes with a 10-under-par total of 206 to secure her third success in her last seven tournament starts, a run which has seen her finish no worse than sixth place.

"I didn't have high expectations and I knew there were things that I need to keep working on. As for the way it's been going, I know I say this over and over, but I'm just having so much fun."

Stanford and Wie began the day level on eight-under and both moved onto nine-under before Stanford bogeyed the sixth.

Another bogey on the 10th and a Wie birdie gave the Hawaiian teenager a three-stroke advantage. However, Wie drove into the water on the 11th, eventually making a double bogey -- and from there Stanford kicked on to seal the fourth tournament victory of her career.

"I felt like I played pretty solid, I just had one bad hole," said Wie. "Obviously, right now I am a little disappointed, but I can take a lot of positive thoughts from this week."