BEIJING, China (CNN) -- China surpassed the United States in 2008 as the world's top user of the Internet, according to a government-backed research group. 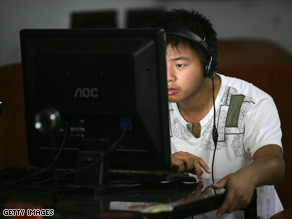 Nearly 91 percent of China's Internet users are surfing the Web with a broadband connection.

The number of Web surfers in the country grew by nearly 42 percent to 298 million, according to the China Internet Network Information Center's January report. And there's plenty of room for growth, as only about 1 in every 4 Chinese has Internet access.

The rapid growth in China's Internet use can be tied to its swift economic gains and the government's push for the construction of telephone and broadband lines in the country's vast rural areas, the report says.

The Chinese government wants phone and broadband access in each village by 2010.

Nearly 91 percent of China's Internet users are surfing the Web with a broadband connection -- an increase of 100 million from 2007. Mobile phone Internet users totaled 118 million by the end of 2008.

While China's Internet usage has been growing in leaps in bounds, the government limits the Web sites its citizens can visit.

Earlier this month, China released a blacklist of 19 major online portals and Web sites, including Google and Baidu, that it claims provide and spread pornographic or obscene content. The move came as several Chinese government agencies, including the Ministry of Public Security, launched a month-long campaign to clean up the Web, according to the state-run Xinhua news service.

China has come under criticism for restricting Web access to ordinary citizens as well as on local and foreign media covering last year's summer Olympics in Beijing. The U.S. State Department noted in a 2008 report that China had increased its efforts to "control and censor the Internet, and the government had tightened restrictions on freedom of speech and the domestic press" and bloggers.