LAS VEGAS, Nevada (CNN) -- Attention audiophiles, old-school vinyl listeners and the very rich: Do we have a piece of stereo equipment for you. 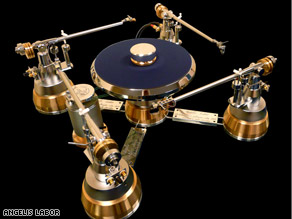 Angelis Labor's Gabriel turntable is made from bronze and steel and can be customized with up to four arms.

It's called the Gabriel Turntable, and you won't find it at Wal-Mart. Crafted in limited editions by an Italian company that will engrave each buyer's name on it, the Gabriel is to a Kenner Close 'N Play what a Ferrari is to a Yugo.

"When I look at it," said Placido Pappalardo, co-owner of maker Angelis Labor, "the only word that comes to mind is love."

Angelis Labor executives proudly unveiled their turntable last week at the International Consumer Electronics Show, where its retro appearance and mechanical design set it apart from the cacophony of digital gadgets on display. That, and the price: up to $64,000, depending on which model is ordered.

The Gabriel is made from aluminum, bronze and stainless steel and can be customized with up to four arms. Each arm is made in a Modena, Italy, factory that also builds Ferrari parts. A one-armed model costs about $27,000, while a four-armed version runs for $64,000, including installation.

Watch the Gabriel in action »

"It is a thing of beauty," said Jonathan Valin, executive editor of The Absolute Sound magazine, who saw the turntable in Las Vegas but didn't get to hear it. "Whether it is a world-class turntable, I don't know."

The Gabriel is a magnetic suspension turntable, meaning that calibrated magnets are used to lift the platter a few millimeters above its bearings. This helps reduce vibration, which can affect sound quality.

"It's as if the whole turntable is floating in air," Pappalardo said.

The entire device rests on a custom-built, vibration-dampening table. It takes half a day for an Angelis Labor technician to set the whole thing up and calibrate the turntable.

The Gabriel is not yet in stores. Angelis Labor is now seeking a distributor to sell the turntable through specialty audio retailers who can demonstrate it personally for customers. Unlike most manufacturers, the company has no interest in selling it on the Web.

"We will never allow anybody to sell our products on the Internet," said Pappalardo, perhaps the only business executive at CES this year to make such a statement.

The Gabriel is not the only four-armed record player on the market. Nor is it the most expensive: the German-made, 770-pound Clearaudio Statement turntable costs twice as much.

But with vinyl making a comeback, the Gabriel may appeal to audiophiles who believe that listening to old records on a high-end player is like going back in time.

"They're not just eye candy. They actually sound better," said Valin, who prefers analog sound to the digital sound produced by CDs and MP3 files.

But even Valin wonders what kind of person would pay $64,000 for a turntable.

"You'd have to be very wealthy, very much into vinyl or very crazy," he said. "Or all three."