(CNN) -- Janis Krums was heading to New Jersey on a ferry when he clicked a snapshot with his iPhone of US Airways Flight 1549 partially submerged in the Hudson River. He uploaded the picture to his Twitter account and then forgot about it as he assisted in the rescue of the plane's passengers. 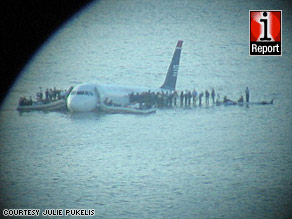 iReporter Julie Pukelis used a camera and a telescope to get this view of the scene in Hudson River.

The deluge of image views crashed the servers of TwitPic, the application that allows Twitter users to send photos with their Twitter updates or "tweets."

"I posted it because I thought 'That's pretty newsworthy' and I wanted to share it with the people who follow me on Twitter," Krums said. "I was letting some of the survivors use my phone and it wasn't until later that I looked and saw that I had quite a few messages."

In an era when even the president of the United States has a Facebook page and spectators texted and tweeted about Inauguration Day, the power of online and digital social networking is clear.

Barack Obama tapped into the stream for his grass-roots presidential campaign and the Israeli Consulate in New York used its Twitter account to disseminate information during the recent Israeli-Palestinian conflict in Gaza.

Accounts of the deadly attacks last fall in Mumbai, India, the May 2008 earthquake in China and last week's plane crash show what used to be just a virtual gathering place to communicate pet peeves or plans for the weekend has evolved into a go-to spot for eyewitness news -- sometimes even before mainstream media has had time to crack the story.

Twitter co-founder Biz Stone said Twitter users were the first to alert others last summer after an earthquake hit Southern California. "The earthquake struck at 11:42 [a.m.] PST and at 11:42 PST people started twittering," he said.

Twitter allows its users to post messages, or tweets, to their accounts that are then distributed to those who are "following" that user online. Stone noted that there was an Associated Press story on the quake that he saw posted nine minutes later on their site and said that during those nine minutes there were more than 3,600 tweets.

"That's when it sort of struck home for me," he said. "With Twitter, we have this real-time feed of what people around the world are seeing, thinking and feeling."

Such citizen journalism is in some cases happening almost accidentally, said Susan Jacobson, an assistant professor at Temple University in Philadelphia, Pennsylvania, who researches the impact of technology on journalism.

"Most people are just sending this information off to their friends," Jacobson said. "The main thing to take from sites like Twitter and Facebook is that they are informal modes of news dissemination."

Part of that informality includes brevity -- tweets have a maximum capacity of 140 characters, and Facebook statuses can only be a few lines -- and the possibility of inaccurate information. Jacobson said users, especially those who have grown up in the digital age, are very much aware of that.

"Young people, I think, have an innate radar about what is legitimate and what is not," she said. "They realize that not everything they read and see on the Web is true."

Stephen Hultquist, a Boulder, Colorado, consultant who gets a great deal of his breaking news from Twitter, said traditional media sources also make mistakes or give skewed reports.

"If anything, Twitter reminds me that everyone is human and they all have their own views and a paradigm through which they see the world," said Hultquist who had a unique appreciation of the quick, firsthand tweets that came after the earthquake in China last year.

"I was five miles from the epicenter of the earthquake in 1989 that happened right before a World Series game and I noticed that the media that was reporting on it wasn't getting it all right," he said.

Immediacy, said iReporter Jim Davidson, is one reason he posted his images of the downed plane in the Hudson on Flickr in addition to CNN.com. "When something like this happens, it's an easy way to syndicate it," said Davidson, who lives two blocks from the Hudson in Hoboken, New Jersey.

Social networking sites also enable spry reactions to news. Rob Reale of New York City started a Facebook group soon after the crash for the "Fans of Sully Sullenberger -- and the crew of Flight 1549" to celebrate the pilot who is being hailed as a hero for deftly landing the plane. The group quickly swelled to more than 27,000 members, some of whom posted video and photos and provided information that Reale used to update the page.

"I felt like the Facebook group was an opportunity to spread the good news," Reale said of the crash, which all survived. "Part of it was getting the word out and part of it was keeping that good feeling going."

Chris Krewson, executive online editor for the Philadelphia Inquirer, has a personal Twitter account in addition to posting tweets for his paper. Mainstream media is learning to better utilize online social networking to connect with its audience, he said.

"People are already talking about the news," Krewson added. "This is just a way for us to involve ourselves in the conversation."