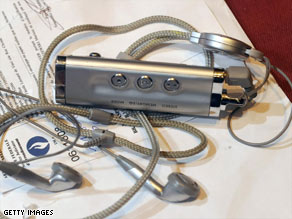 A New Zealand man finds confidential U.S. military files on a used MP3 player he bought at a thrift store for $9.

It sounds like the opening line to a bad joke. And this case was a bad joke -- for the Pentagon.

Chris Ogle of New Zealand was in Oklahoma about a year ago when he bought a used MP3 player from a thrift store for $9. A few weeks ago, he plugged it into his computer to download a song, and he instead discovered confidential U.S. military files.

"The more I look at it, the more I see, and the less I think I should be," Ogle said with a nervous laugh in an interview with TVNZ.

The files included the home addresses, Social Security numbers and cell phone numbers of U.S. soldiers. The player also included what appeared to be mission briefings and lists of equipment deployed to hot spots in Afghanistan and Iraq. Most of the information appears to date to 2005.

The New Zealand journalist who first reported the story was able to contact at least one of the soldiers by dialing a phone number found in the files. He hung up once she explained why she was calling.

Pentagon officials told CNN that they are aware of the MP3 player, but can't talk about it until investigators confirm that the information came from the U.S. Department of Defense.

"The government isn't doing a good job of protecting the information that it collects," said Marc Rotenberg of the Electronic Privacy Information Center in Washington.

Despite government efforts to protect sensitive information, this is a growing problem, privacy experts say.

Two years ago, the Department of Veterans Affairs lost track of a laptop with the personal information of millions of soldiers. And computer hard drives with classified military information have been found for sale at street markets in Afghanistan.

"When you can identify American personnel, when you have their names, their home address, their cell phone numbers, you put people in a dangerous position," Rotenberg said.

In this case, the personal information for several hundred soldiers landed in friendly hands. Ogle told CNN the MP3 player is being kept in a safe place and he will happily turn it over to U.S. military officials if they ask for it.